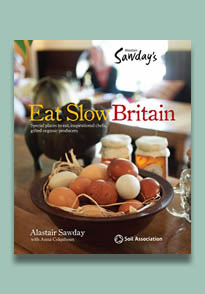 I first discovered Alastair Sawday’s books when I picked up a copy of Special Places to Stay. It was referred to constantly by the travelling consultants in the company where I was working at the time. Up until then I had always felt a bit sorry for them – always being booked into B&Bs. The book introduced me to some of the wonderful B&Bs available throughout the UK. They were indeed very special places to stay and a far cry from the soulless hotel chains.

Since then Sawday has steadily increased the reach and depth of his guides – they now cover France, Italy, India, Ireland, Portugal and Spain. He has set up his own carbon neutral publishing company – all his books are printed in the UK. Generally if you buy books from the shop on his site they are cheaper than on Amazon.

Eat Slow Britain celebrates the best of British food – from talented producers, to the pubs, restaurants and hotels that focus on serving fresh local seasonal fare. The book introduces 45 handpicked venues where the spaces are as beautiful as the food – are places where you can relax and savour top quality dishes that do not rely on airplanes or ships to deliver the essential ingredients. We are introduced to owners and chefs that are enthusiastically growing or sourcing the best organic ingredients.
Good organic food need not be expensive – in amongst the deluxe establishments are a handful of pubs and places where you can eat great food for a modest price. Ultra fresh food just tastes better. This book is a godsend for Danny and me. On the rare occasions that we eat out we want to eat well and not be rushed.
The book also focuses on specialty producers from pig farmers to cheese makers and chocolatiers. A fascinating insight into the working lives of people that Sawday refers to as “Ethical entrepreneurs”. As Sawday writes,
“Eat Slow is a celebration of the people who serve and produce our food with thoughtfulness. They are, I think, heroes of this new age of awareness, many of them putting the principle of good food first and all of them driven by a profound understanding of the dangers we face if we don’t sort out our food systems.”
Eat Slow is co written and researched by Anna Colquhoun. She trained as a chef in San Francisco and was an intern at Alice Waters’ legendary restaurant Chez Panisse. Having studied anthropology at Cambridge she has travelled extensively to research local cuisines and regional foods. She writes the blog – Culinary Anthropologist.
This is not just a beautifully illustrated foodie guidebook aimed at people already in the know. It heralds the power of a movement that is steadily sweeping across our country, from the people who are growing their own vegetables and buying locally produced meat to the top London restaurants who employ foragers to add wild food to their menus. I must admit I had no idea how many organic independent food producers are operating in the UK.
The book is published in collaboration with the Soil Association and the introduction is written by Patrick Holden (Director of The Soil Association). There is an article by Eric Schlosser (who wrote Stuffed) and an introduction to the Slow Food Movement – that was started by a group of young people led by Carlo Petrini in Italy back in the 1980’s. They were concerned that regional specialities were being eroded by industrialised food production. Food had become fuel rather than something to be celebrated and relished. There is even an article on the Triodos bank – the ethical bank that has won the Queen’s Award for Enterprise for its pioneering approach to finance.
Eat Slow Britain is a well rounded and informative book. Including lists of relevant books and Internet sites. I’m very proud that The Cottage Smallholder is included on the list of recommended blogs. Sawday’s beautiful and inspiration book makes me long to pack a bag and take a relaxing holiday enjoying the best of local organic British food. It has also made me even more determined to seek out the most sustainable options in our garden, when buying food and in the world beyond.