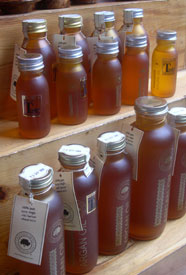 “Have you heard about argan oil and the goats?” Katherine turned to me.
“No. What goats?”
We were standing in Borough Market on our foodie day out.
“Well,” her tone was surreptitious, “there is this tree in Morocco called the argan tree. The goats love the fruit and they scramble madly to eat it. The stones of the fruit are so hard that they pass right through the goat and out the other end, undigested.”
“Then the goats tread the kernels?”
“No. The stones are collected by Berber women who smash them open and crush the kernels to make the oil. It tastes great. There are also argan oil beauty products. Go and try some.”
She pushed me towards the stall.

The lady on the argan oil stand was friendly and helpful. I wasn’t keen on the idea of the goats’ role in the oil production but I tasted it. The oil was nutty and absolutely delicious.

Feeling a bit of a devil, I bought a bottle. Goat or no goat, it was great oil. In fact if you venture onto the Wild Wood Groves’ website you will see that goats are banned from their argan tree groves for three months prior to harvesting the fruit until well after the harvest has ended. So If you buy oil from Wild Wood Groves, the argan stones have not had a jouney through the guts of a goat. If you buy argan oil from elsewhere in the region the journey of the kernels may be a bit longer than ground-hand-basket (observed by fenced in goats).

Argan oil is cold pressed, extra virgin and extremely beneficial to health. It has nearly double the vitamin E found in olive oil, is 80% unsaturated, rich in omega 6 and 9. It is produced in Morocco where it is used to lower cholesterol and protect the heart, liver and gallbladder. It has been used there for centuries to treat a whole gamut of conditions. It is also believed to be a tonic and aphrodisiac.

The production of argan oil is labour intensive. It takes one person a couple of days to collect enough seeds to make a litre of oil. The argan trees are covered with spiky thorns so it’s difficult to pick the fruit, which is gathered off the ground when they have dropped in late summer. Then the fruit is peeled from the nuts and the nuts are cracked between heavy stones, one by one. The almond shaped seeds at the centre of the nuts are pressed to produce the oil. Nothing is wasted. The fruit is fed to the goats and the cracked shells are used as fuel (they can burn for 30 minutes). Once the seeds have been pressed, the seed cake is fed to cattle.

This oil has great depth of flavour. Just a tiny dash on a salad can give a totally new dimension of flavour. As a lot of the health giving properties can be lost if it is heated, it’s best drizzled on just-cooked food. It’s also very good as an appetiser. Just dip crusty fresh bread in a saucer of argan oil.

If you want an usual and special present for someone, argan oil is well worth considering. We bought a 60ml bottle for ?6.00 in Borough Market and use it as an occasional treat. You can also buy the oil on line from the Wild Wood Grove website.