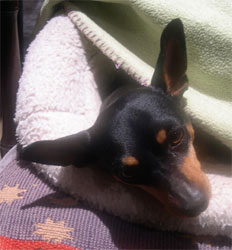 Inca relaxing after a long day in the garden

The bliss of waking up to no commitments was perfect this morning. I’m working for a couple of hours tomorrow but this is good as it will finance my extravagance at the garden centre today. A happy hour spent with loads of other people enjoying the prospect of a sunny bank holiday, choosing their summer bedding, grow bags and vegetables. For the first time in months I noticed that nearly everyone was smiling.

My trolley was unwieldy from the start as I cashed in on the offer on grow bags (3 for a fiver). I bought a tray of dark blue trailing lobelia to grow through the 24 white pelargonium plants to we were given as a present. Then scoured the seed shelves for vegetable seeds that will mature mid winter. Parsnips, leeks, Savoy cabbages and curly Kale.

I splashed out on three scented geraniums – I’ll take cuttings so by the end of the summer we will have a large family again. I also bought two delphiniums (King Arthur and Black Knight) that were eaten by slugs the first summer that I moved into the cottage. And have been mourned for sixteen years.

Now I know to plant delphiniums near a tuft of lemon balm. Apparently slugs hate this. Perhaps I should cultivate lemon balm in the kitchen garden? To be effective I would need 50/50 lemon balm and vegetables. So unless lemon balm becomes a key ingredient in a future bio fuel, this is out of the question.

Our slugs are killed with milk or beer. If I find live slugs I feed them to the chickens. Carol and the Guinea Fowl adore them. They also really like the beer soaked cadavers. These are distributed early evening at cocktail hour, when egg laying is finished for the day and the flock is putting their feet up. The healthy milk corpse option doesn’t seem to have quite the same appeal.

I spent the afternoon digging slow release chicken pellets into the relevant borders in the kitchen garden – Danny used all the homemade compost in his award winning (hopefully) potato border. Luckily the pellets were 2 for 1 at the garden centre. Easy to spread but rather whiffy. They turned out to be delicious snacks for the Min Pins who circled around the boxes and hovered up any unearthed pellets. Yuk!