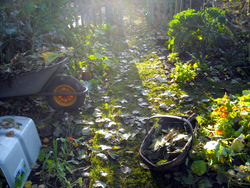 “Danny, I’ve fallen in love.”
Resigned. He’d heard it all before.
“Last time it was a mini roller. What is it this time?”
I asked him to close his eyes and led him into the garden.
“Wow – I can see where you’re coming from. He’s a very handsome beast”
Danny picked up Barrow’s yellow handles and tested his turning circle.
“Can I share him to shift my boxes?”

I bought my first wheelbarrow from a garden centre. As far as I can remember it was quite expensive. I assumed that it had been designed for horticultural use. Gangly and awkward to manoeuvre it often flipped over in response to a heavy load shifting. I wasn’t sad when one of its handles corroded and snapped off. The question was what sort of barrow would be a good replacement? In the garden centre I dithered. Most of the barrows didn’t feel well balanced and were replicas of the one-handled one tossed beside the compost heap.

I hadn’t considered buying a builder’s barrow until I spotted one at my local builder’s merchants. I gave it a twirl in the car park. Designed to manoeuvre in tight spaces it turned like a dream. The pneumatic tyre gave it a bit of bounce to absorb uneven ground when shifting heavy weights. Rugged – this barrow could transport a baby elephant at a pinch. And it was far cheaper than the sturdy models in the garden centre. Of course the barrow on a building site is a tool. It needs to do the job swiftly and efficiently. Any builder worth their salt just wouldn’t buy a badly designed tool.

I squeezed Barrow into Jalopy and drove home. I gave him a test run in the garden with a bag of compost and a curious Min Pin. It was a joy. Like switching from pedal car to the sleekest sports coupé.

We use Barrow a lot for shifting stuff in the garden. Sometimes, like a bicycle, his sturdy tyre needs to be pumped up (he didn’t come with a pump so we bought one especially for him). He is an essential workhorse that we both rely on. If you need to replace a wheelbarrow it’s definitely worth considering one of these.