Posted by Fiona Nevile in Leftovers, Save Money, Vegetarian | 8 comments 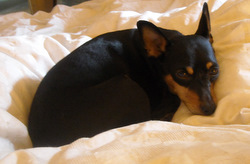 Photo: Inca is a fan of frittata too

“Are you really up for making a frittata. It’s such a palaver, peeling and boiling all those potatoes.”
“I’m not doing potatoes.”
Danny was horrified.
“But we have to have potatoes. That’s the best bit.”
“I’m using the left over roast potatoes from Sunday.”
“Oh. I didn’t know there were leftovers.”

Ever since Veronica left a comment saying that a frittata is a great way of using up leftovers I’ve been determined to do just that. The problem is that we don’t have many leftovers as they are usually guzzled by all things beginning with D (Danny and the dogs).

Last Sunday I skipped supper and went to bed very early. So there were plenty of leftovers – spuds and purple sprouting broccoli – which I swiftly hid in the fridge. Poking around in the fridge I’d also discovered an elderly slab of Stilton and some cheddar cheese. Possibly perfect ingredients for an experimental frittata.

I didn’t mention to Danny that I was using the leftover broccoli as it looked a bit sad in its dish and he was happily wrapped around his computer in The Rat Room.

I gave the spuds and broc a five minute blast of heat in Andrew. Next time I don’t think I’d bother with this step as the slow frittata cooking time would heat them both to perfection.

The result was surprisingly good. Roast potatoes are far more delicious than the sliced boiled spuds that I usually use. A little more effective in the increasing your waistline stakes but worth it as an occasional treat. When you next make roast potatoes why not cook a few more and indulge in this scrumptious feast.

Heat the olive oil in a sauté pan (medium heat, lid on)
Meanwhile crack the eggs into a large bowl, add the chilli sherry and garlic granules and beat until all the ingredients are mixed thoroughly.
Add the cubed Stilton, Cheddar cheese and purple sprouting broccoli and stir gently to disperse.
Pour the egg, brocolli and cheese mixture into the hot sauté pan and immediately lower the heat (our hob has settings from 1-9 so I chose 2).
After a minute or so place the sliced roast potatoes on top and sprinkle the grated Cheddar cheese over them.
The frittata will take about 20 minutes to cook. After five minutes or so use a fish slice or spatula to lift the frittata away from the surface of the sauté pan (just a few millimetres so that you can peek at the base). If it is golden brown turn the temperature down to one so as not to let it burn. Lift the frittata in the same way every five minutes or so.

After 20 minutes or so it should be cooked through – if necessary put it under a high grill to brown the top.

Serve on warm plate with some good beer.