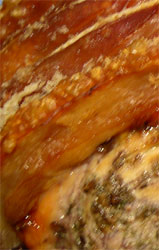 There’s a great section in Waitrose branded “Cooks Ingredients”. A range of rather special things, attractively packaged. Thinking about it, the majority of products that any supermarket sells are cooks ingredients. It’s just that we don’t think about that as we plod round doing the weekly shop in Tesco.

We buy our anchovies from the “Cooks Ingredients” section (Update March 4th 2007: Tesco now has a similar section and sells a similar jar for a similar price). A decent amount packed into a Le Parfait jar, much cheaper than buying those tiny tins. We also buy their myrtle. I didn’t know that myrtle was edible until I picked up the cylinder and read that it is great as a rub for roast pork. Half an hour later I presented the Sunday roast expert with the long tube of myrtle. He was intrigued and the next Sunday cooked a joint of roast pork that I’ll remember forever.

Since then he has adapted his myrtle rub to make it even better. The apple gravy is worth a shot too. The other thing to remember is to get a decent joint. We are lucky to be near a fabulous butcher. Fred Fitzpatrick on Exning Road, Newmarket (since retired, sadly). The joint that they recommend is “spare rib of pork” for best flavour. This is not spare ribs but collar of pork that has been rolled and tied by the butcher.

Allow about 1 kilo for two/three people. It will shrink in the cooking and anything smaller will end up too dry. That size will give you seconds and leftovers for another meal. We chop up the remains of a joint to add to a curry or stir fry or eat wafer thin slices with wild plum chutney and baked potatoes.

Try and avoid those joints you see in supermarkets where the fat/crackling is held on by what looks like a hair net. They are often tasteless and disappointing. Because we are very busy and time is short, we devised this method for producing the best roast pork that we have ever tasted. The preparation is quick and it works every time.

For us, roast pork can be a pretty bland dish without these three elements
1. Crispy crackling
2. Easy no-work apple-flavoured gravy
3. A fantastic aromatic zesty flavouring to the outer slices
Good roast potatoes are a must with this dish and our recipe is here.

Recipe for perfect roast pork with apple gravy (feeds two/three with seconds and leftovers)
Preheat your oven to 240 (220 fan assisted, gas mark 9). This temperature will crisp the crackling.

Method:
There’s no need to rub the crackling with salt to remove the moisture. We use good quality kitchen towels these will absorb and extract moisture faster than salt. Ideally dab the crackling aggressively with kitchen towel. Apply another piece of the kitchen towel and let it sit for a few hours. Last Sunday we forgot to do this, dabbed it furiously twice, and it worked just as well.