Posted by Fiona Nevile in Fish and Seafood | 10 comments 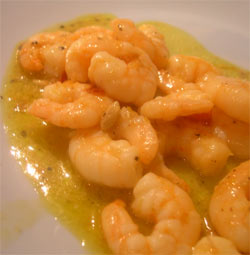 It’s Danny’s birthday.
“What would you like to eat this evening?”
“Well, I don’t know really.”

“How about Diana Henry’s Spiced Chicken breasts on melting onions with preserved lemon? They’re delicious Even Bunty asked for the recipe.”
“They sound great but I don’t remember them.”

But I couldn’t find the chicken breasts in the freezer.

“How about a takeaway from Arif?”
D’s eyes lit up. This Indian restaurant is very good since they employed a new chef two years ago. We don’t do takeaways these days but a birthday is a Birthday.

I had also discovered some frozen raw king prawns.
“There’s just one more option. Gambas Pil Pil. A whole pack just for you plus half my pack?”

Resistance was futile. The prawns won.

Gambas Pil Pil are ideally a starter. Bur can be padded out for a main course. We’d recommend a good salad and loads of crusty bread. D’s brother Donagh cooked these for us on the memorable evening, just before he fell, laughing, into the pond. I still smile at his comment the next morning.
“I woke up and wondered what the green stuff was on the tiles in the shower. Then I saw my pile of clothes and the duck weed.”

I’ve posted the recipe for Gambas Pil Pil as a spaghetti sauce. But they really shine accompanied by crusty bread and a good bottle of chilled Pinot Noir. It has been said that they can make a man forget the passing of the years for the ten minutes that it takes to devour them. I can vouch for that. Could this be the culinary version of the Power of Now?