Posted by Fiona Nevile in Bread, Save Money | 13 comments 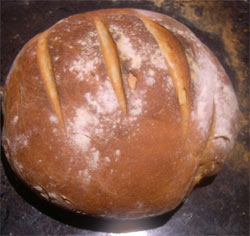 I mentioned that I was making bread last night. I was going to make Atomic Shrimp’s recipe (I even have the Tesco Value flour!) But at the very last fence I shied away and tried this recipe for French bread. I cut my first slice at one this morning from the loaf in the photograph. Then another as the dogs sampled a bit, drawn down to the kitchen by the warm bread smells. Delicious waistline expanding stuff.

This morning as I toasted a slice for breakfast (excellent) I made a sandwich for lunch for my lunch box. Tomato, parma ham and mozzarella (my favourite). At lunch time the bread was so filling that I couldn’t finish the sandwich and I wasn’t dreaming about banana, chocolate and cheese all afternoon. The bread was good, just as described in the recipe. Crusty, with a satisfyingly chewy yet airy bite.

Veronica’s comment, and her experiments with the Five Minute Artisan bread intrigued me. The French recipe stated that if you used dried yeast it would need far less time for the proving. Even though I slashed it by half it was a bit of a palaver. I accelerated the last rise by positioning the tray beside the slow cooker as it simmered the ingredients of twelve portions of a tasty Cottage Pie.

Perhaps the five minute artisan bread would be the answer? So this evening Jalopy purred into the supermarket car park. I bought some more dried yeast and sped home.

I followed Veronica’s link to the recipe in the New York Times and decided to start with this before trying her own version. It’s really chilly tonight so I bought the heater in from the barn, mixed the ingredients and set the bowl beside my laptop and the wafts of warmth.

Slowly the unpromising splash of four, water and yeast at the bottom of the bowl transformed into a huge pockmarked face, bulging under the tea towel.

I didn’t care that this new friend is a silent companion that will live in the fridge. It entertained me all evening and I reckoned that if the bread tasted good it would be a godsend to the tribe without bread makers and not much time for kneading.

When it came to the stage of cutting off a grapefruit sized portion with a serrated knife, I twigged that something had gone wrong. I lifted the wet chewing gum mass onto a baking sheet covered with parchment. Over the next hour the bread expanded horizontally and I popped it the hot oven.

Even though the dough was clearly too wet, this method of bread making looks promising. My 12″ disk turned into a golden loaf with a thin crisp crust with a light honeycomb centre. With a bit of tweaking, this bread could be amazing.

Thanks Veronica, tonight I’m going to try your version and I’ve spotted that the book is on offer on Amazon!