Cauliflower and broccoli cheese with socks on recipe 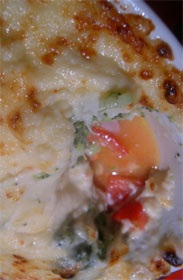 I’m not keen on naked cauliflower but cauliflower cheese has been a staple for years. Somehow dressing the cauli in a cheese sauce and grilling the top transmogrifies the ingredients into something delicious. Or so I thought before I presented my old traditional version to Danny with a flourish.

He wasn’t overly impressed.
“Can we have it with baked potatoes next time? It’s not really a proper meal on its own. More of a snack.”
This was a bit of a body blow. D is very particular about his baked potatoes. His recipe is a palaver to prepare.

So over the years I’ve titivated my recipe, adding bacon, different cheeses, breadcrumbs. In fact, trying anything that would enhance it. The secret challenge was to create a dish so filling, nutritious and delicious that adding baked potatoes would be ridiculous.

It took quite a bit of ingenuity to gradually convert the plaintive plea for baked potato into an intrigued silence as he tried to discover the changes each time. We have several recipes for cauliflower cheese and it’s a dish that I constantly play with. The recipe below is best if you have access to chunks of bacon that you can hack into 2 cm cubes. The fresh tomato and bacon layer brings a freshness to the dish and balances the creamy, cheesy cauliflower and broccoli perfectly. A great supper dish for someone who needs a bit of coddling. Absolute comfort food.