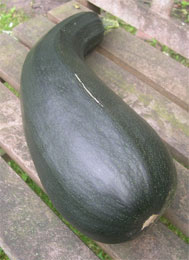 Danny and I both enjoy the weekly visit to our butcher. D considers them to be great “craic”. He shopped happily at Fred Fitzpatrick’s each week when I was down in Saffron Walden for months. When I was able to drop by again on Friday, Fred was able to do a passable Cork accent. I was impressed. Admittedly I had been away for some time.

I spotted a large marrow lounging amongst the vegetables when I breezed in last Friday. It had a label stuck on its side which I examined as John sliced the sirloin steaks. It read “Free to a good home.”

The word Free always makes my heart skip a beat. I love the look of a marrow. And then I remember endless watery marrow based meals when I was growing up. My mother raved and guzzled. We pushed the pieces around our plates until she called time. Somehow she never got the hint.

Despite this I wanted to adopt this giant, sloth like vegetable.
“And are you going to stuff the marrow?” Asked John, as he wrapped the chunky pork chops. I wasn’t sure. We had tried Mrs Beeton’s stuffed marrow recipe and hated the result. I kept mum.

John pointed to the Dolmio sauces on the shelf.
“I stuff mine with mince and herbs and bake it in this sauce. A lady just came in and she stuffs hers with mince and onions and loads of Lea and Perrins.” He was setting up a challenge. Butchers – give them an inch…

Instantly I planned a small portion would be baked with Fred’s excellent mince. The rest would be made into chutney, I was pretty sure that there were marrow recipes in the Oded Schwartz book, “Preserves”, that Danny bought me for Christmas last year. Sadly out of print, it is a real gem. Danny found it on eBay, Australia. In England it can change hands for astronomical sums. From Australia, it was a bargain at forty pounds including postage.

I tottered back to the car with the marrow under one arm, balancing the fat carrier bag on the other. As I fastened the seat belt over the marrow, so it wouldn’t slip off the back seat and get bruised before we got home, I remembered that the cottage kitchen is packed with fruit waiting to be turned into chutney, wine and jelly. Where was it going to live before it was transmogrified into something delicious?

Danny goggled as I staggered in with our new pet. After a brief photo call it has moved around the kitchen waiting for that moment when marrow meets recipe and knife. I’ve dropped the idea of stuffed tranche of marrow for the moment as I am keen to make Oded Schwartz’s Marrow and Ginger Preserve and his Marrow Chutney.

“If it’s a toss up between the two, I’d much prefer the chutney,” admitted Danny gently. “There is just one problem. I have become rather fond of our large green companion vegetable.”

Marrow is huge so we can easily make both the preserves, chutney and possibly even unfreeze the mince and try our variation of stuffed marrow Ã? La Cottage Smallholder. I will report back after next weekend and let you know how I get on.

I made Farmers Marrow Rum eventually. It will be a year beore we taste the results.