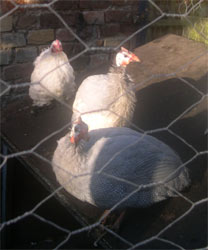 I am growing fonder of my 19 week old Guinea Fowl by the day. They are the progeny from the Farming Friends & Cottage Smallholder Interblog Guinea Fowl Breeding Event. This event was started six months ago when Sara, from Farming Friends, sent us an egg box of six guinea fowl eggs in the post (next day delivery) to put under a unhappy and bullied broody hen. This hen has now become an international superstar and even though she is unaware of her fame, Mrs Boss is finally a happy and contented bantam.

Nurtured by Mrs Boss, five out of the six eggs hatched out and have delighted us for months. We have four healthy Guinea fowl (one died). Headstrong and determined, they throw Carol into the shade when it comes to strength of personality.

They are driven by one overwhelming delight. Food. Whether it is the wild bird seed treat in the morning or the green leaves plucked from their very own row of Swiss Chard, they are the first to grab what’s on offer.

It must be all their early training – when they were tiny keets and they fought over shredded lettuce. Do you remember the movie?

Now they will snatch vegetables out of each others beaks so there is a lot of scurrying away to enjoy the tastiest morsels in a secret spot. Sometimes two guineas have the same idea and rush from different directions to the seclusion of the back of the hen house, narrowly avoiding a collision by turning on a pin head in the nick of time. So treat time has the added benefit of a mini work out for the birds.

Mrs Boss’ life has transformed. She loves her brood. And the guinea fowl don’t mind this diminutive bantam tagging along with their gang. Surrounded by four sizeable guineas, she is no longer bullied. In fact, very little bullying seems to be going on at all. I suppose the arrival of the keets added a new dimension to all the chickens’ lives.

I still have not worked out the gender of the guineas. Following Sara’s advice I have studied them carefully. Apparently the male guineas have bigger helmets and wattles. The helmet is that little punky crest on the top of their heads. The wattles hang down either side of the beak.

We thought that Cloud was a male but have discovered recently that she is female. She is smaller than the rest and has started to make the distinctive “Come home” cry that only female guineas voice. There is at least one other female in the group as I have heard the “Come home” cry when they are separated from Cloud. One of this group has larger and more prominent wattles we have named him Thunder. So we think that we have at least two egg layers along with one male and one mystery guinea fowl.

Like the Min Pins, the guineas love a good old shriek. Particularly when I am not following their instructions to feed them their five a day through the fence.

This evening, I banged the greenhouse door a bit too hard and this set them off. Even Cloud, who was already in the hen house dormitory added a few muffled cries to the cacophony going on in the run. They are easily, magically soothed with a few calming words.

Thank you Sara. They are a joy.