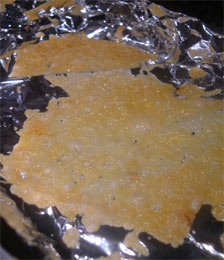 “Even though we’d been vegetarians for years we sometimes had a yearning for bacon.”

Teresa was running a vegetarian restaurant at the time.

“What did you do?” I imagined Teresa hot footing down to the local town wearing a large brimmed hat and scoring a wad of bacon from a backstreet butcher.

Her face softened with the memory.
“How on earth do you fry cheese?”
“It’s easy. Grab a non stick frying pan. Heat it to a medium temperature and cut your cheese fine. It bubbles up and makes a golden brown crispy alternative to bacon. It’s delicious.”

Tonight we were eating French Onion Soup. It needs little boats of crusty bread topped with grilled cheese. But we had polished off the last of the bread at breakfast. Disconsolate, Danny poked about in the bread bin.
“Never mind, I’ll make fried cheese,” I volunteered.

The Teresa Conversation was at least seven years ago, locked securely in my memory bank.

Not owning a non-stick frying pan, I set a heavy stainless steel sautÃ© pan on the hob. The cheese bubbled, looked promising and stuck firmly to the pan. With enormous effort I managed to prise some cheese off the base of the pan. Tasty but greasy stuff. Not what I had imagined at all.

We were heating the oven for a pizza main course, so I put a few slices of cheese onto a sheet of greaseproof paper, They looked wonderful after ten minutes at 180 (fan) and fused beautifully and irrevocably with the foundation of greaseproof paper.

At this stage D was hovering in the kitchen as I surreptitiously stashed the cheesey greaseproof paper combo in the bin.
“I just need to know how long it will be before supper. 5 minutes? Half an hour? There’s no pressure.”

But there was pressure. I had the fried/baked cheese bit firmly between my teeth. He was granted an extra half hour in The Rat Room whilst I planned my third campaign with a roll of aluminium foil and a cheese grater.

It worked. Ten minutes at 200c / 180c fan had the small piles of grated cheddar transformed to golden brown, bubbling pools. Easily peeled from foil to mouth. If you scrunch up the foil loads of cheese fat will drain away leaving you with mountain peaks of lower fat crisp cheese.

Picking over the spoils of battle, the oven baked cheese won hands down. Light and delicately crunchy with a wonderful concentration of flavour. Great launched on the steaming bowls of onion soup.

Make loads, the crumbs would be good sprinkled over anything that needs added zing.