Posted by Fiona Nevile in Vegetables and Sides | 29 comments 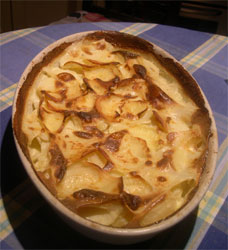 Gratin dauphinoise reheat well. In fact, when I worked in a restaurant years ago, they were made in advance and reheated and browned under the grill on demand. Robert (pronounced Rob-bear) was French and longing to toss away his hat and paint (pictures) full time.

He smoked cigars in the kitchen and cooked like a dream. His Dauphinoise were nearly as good as Danny’s. They included a layer of gruyere cheese, which was pretty good. Danny’s Dauphinoise have a softer, gentler taste. Robert’s Dauphinoise made their presence felt.

To make good Dauphinoise potatoes you need a large shallow dish (the oval ones are often referred to as a gratin dish). If you want to save time, invest in a mandolin. One Christmas it was Danny’s turn to choose the “useful present” from my mum. She rang us to verify.
“Is this an Elizabethan guitar or a vegetable slicer?”
Danny was very quiet when he opened his present. Weeks later he was pale and totally silent when I drove him to outpatients. Be careful with the super sharp, state of the art Japanese mandolins

and always use the protective attachments.

Danny’s gratin dauphinoise potatoes do not contain cheese. If you prefer a little cheese in the mix I have another recipe here – https://www.cottagesmallholder.com/recipe-cheesy-…ge-smallholder-176/