Posted by Fiona Nevile in Duck Goose and Turkey | 3 comments 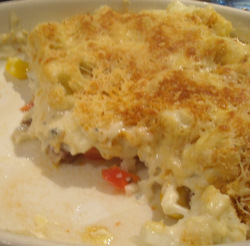 At the end of the day in the market, vegetable prices are slashed. I totter back to the car with bulging bags of spuds and veg to supplement the stuff from our kitchen garden. Yesterday I bought a giant cauliflower for 50p and made a deluxe cauliflower cheese using some delicious crumbly blue goat’s cheese – bought for a few pence from the Tesco CFC. We always line the base of the pie with tomatoes (ours are still going strong) and a handful of either bacon or ham. Last night it was some smoked duck breast that I’d unearthed in the freezer. By sprinkling homemade dry breadcrumbs over the top before adding the grated cheese the topping was deliciously crunchy. The perfect supper for a chilly winter’s evening.

The Min Pins enjoyed a little for breakfast too.

The one thing that I had forgotten that Danny only likes mild goat’s cheese but he happilly polished off the Christmas biscuits.

Ingredients:
1 head of cauliflower
A small handful of chopped smoked duck breast – or ham
30g of grated cheap cheddar cheese
100g of grated blue goat’s cheese
250g of chopped tomatoes (I used a mix of yellow and red cherry toms)
50g of butter
80g of plain white flour
500ml -750ml of milk (depending on how thick you want your sauce to be)
1 tsp of garlic granules (or a chunky clove of garlic crushed and chopped very fine- if you use chopped garlic cloves add at the roux stage)
I tsp of anchovy essence
I tsp of mushroom ketchup
1 pinch of mustard powder
1 pinch of cayenne
half a tsp of chilli sherry (this does not make it hot, just sultry)
1 large handful of homemade dried breadcrumbs
Freshly ground white pepper to taste
Method:
Heat the butter and, when it has melted, add the flour. Let this roux simmer for a minute or so to get a bit nutty. Add the milk gradually, stirring constantly so that the roux absorbs all the milk before you add the next splosh. In this way you should avoid lumps. When all the milk has been added let the sauce simmer for ten minutes to thicken. (My sauce was very thick at this stage).
Meanwhile wash the cauliflower divide into similar sized florets and add to a large saucepan of boiling water. Simmer for about eight minutes (testing after five) until cooked but with a bite. Drain through a colander and set the colander on the original saucepan, in a warm place to drain as you continue to make your sauce.
Add the grated blue goat’s cheese to the thick béchamel sauce and stir until it is absorbed. Add the chilli sherry, garlic granules and anchovy essence. Taste and season with freshly ground white pepper.
Put the smoked duck breast/ham in the base of a large shallow dish. Add the layer of tomatoes. Arrange the cooked cauliflower over this and pour over the sauce.
Sprinkle dried breadcrumbs and then the remaining cheese over the surface of the dish and place under a medium grill for about five to seven minutes to brown.