Navigation Menu
Home » Cottage tales » Digging, planting and watering your patch. And reading if you have the time.

Digging, planting and watering your patch. And reading if you have the time. 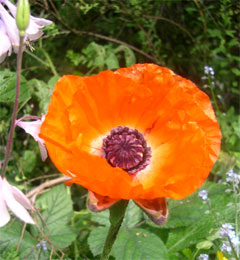 Last night we planted the seed potatoes in Danny’s new border. He wanted slightly bigger spacing than I imagined so we only needed 50 seed potatoes. The last ten were halved spuds with eyes in both sections. Then I wandered into the greenhouse and discovered that we had ten teeny seed spuds left in the original bag.
Danny sparkled, “Keep them in reserve, just in case some fail.”

We ate supper late, and when D went up to the Rat room for a couple of minutes at the end of the meal I fell asleep at the table. It was only ten o’clock and I tend to go to bed at around one. But the last week had taken its toll. I felt much fitter, my back felt like a rippling swathe of toned muscles, somehow impossible to observe in the bathroom mirror. Still more akin to Mr Blobby than Heroine of the Universe.

So I swung the Min Pins over my shoulder, heroine style, but dilly dallied to fill a plump hot water bottle and then retired to bed. The Min Pins love a hottie and so do we. When Danny found me in bed he was astonished,
“You endlessly say that you are going to bed early and then I find you snoozing on your laptop pillow at two in the morning.”

But there was a real draw. I’ve been reading a few of Elizabeth Jane Howard’s earlier novels. These were leant to me by Seraphina. I remember the covers but not the books. I’ve just finished her first novel, The Beautiful Visit – good, interesting but too much going on. I‘ve also read After Julius and The Sea Change. I thought that the latter was beautifully written – a real gem. In fact sometimes I just had to put down my brush and withdraw to Jalopy’s front seat to savour the prose and find out what happened next. I don’t charge for my breaks when I’m working. The Sea Change turned out to be quite an expensive read but well worth it. This was the true diamond.

Growing vegetables is mainly about investment in the first few months of the year. The other factor is regular watering which can become a real chore by the end of the summer. The slow drip water butt system relieves this. It’s well worth considering and can be operated electronically if you are away on holiday. It also largely uses free water which is great if you are on a water meter.

I return home at seven p.m. and open the taps on the butts. An hour later I turn them off. Some people that I know only water every four days even in a heat wave. This method of watering encourages the establishment of very deep roots. It is used in Indonesia, India and very hot countries. If you want to save your effort and get the most out of your water check out this link.

We don’t get a cut if you click on this link just want to share the things that we have discovered that are a worthwhile investment.