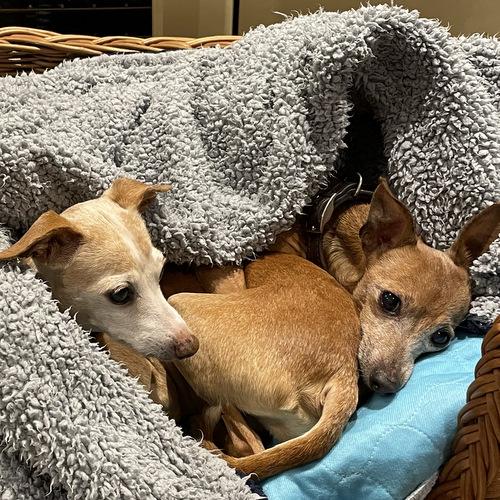 One of the really great things that my mum shared was a love of dogs. Albeit with reservations.

When we were 10 years old we were given a dog. This was a very caring move. It meant that we had to take responsibility for another being. We had to feed the dog, take it for walks and house train this puppy. The reward was a great companion when life got tough during the teenage years – the dogs were allowed to sleep in our bedrooms.


Mum did say that it was hard not to play with the pups when we were at school. She deliberately hung back so that the dogs would bond with us. I really appreciated that.

I was given a pup for Christams. She was sent in a crate on the train – things were very different back then in the 1960s. A tiny, gorgeous puppy stepped out and I was in love. Unfortunately when I went back to boarding school she went blind and was replaced by another older pup that I named Thisbe.

During the holidays Thisbe slept in my bed. On the inside beside the wall. If she was cramped for space she’d put all four feet on the wall and push with great strength until I moved over.

She was ful of character. Loving,intelligent and determined. I thought that she should have a litter. In fact she hated the entire process – the coupling, the puppies and the whole experience. I felt awful.

Then I left home to go to uni, leaving Thisbe with my mum. She slept in a basket in mum’s bedroom and all was well until one night she did a pee.

Mum moved her down to her kitchen. She wined all night and when mum came down in the morning her face was wet with tears.

And she had done a pee.

My mum was an old fashioned country type. If a dog was 10 years old or older and developed a problem she would put them down immediately. Peeing in the house was a big problem for mum. She had no truck with the new drugs that could control the problem.
“If a dog pees indoors you will never get rid of the smell.”

She took her straight to the vet and had her put down.

Mum rang me later in tears. It took quite a whie to forgive her. But of course mum never knew this.

Fanny was put down last week – she had developed bladder cancer she lived happily for a few weeks and then clearly was in pain. I didn’t care about the peeing – found some great mats that dealt with this so their basket was always dry. And a great mop that I could whisk around with aplomb.

Her sister Ruby was suddenly alone after 13 years together.

Tonight Roo lifted her head from under the blanket and her eyes were full of tears and her face was wet.

Dogs do mourn and cry.