Posted by Fiona Nevile in Fish and Seafood, Rice and Pasta | 5 comments 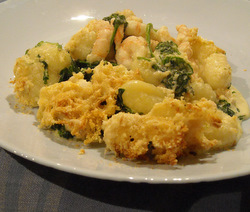 I adore prawns. Could eat them everyday. Two favourite recipes are Donagh’s Gambas al pil pil and Clare’s prawn gnocchi. Prawns are expensive but often there are great reductions to be found in the frozen food section of the supermarket. Yesterday I discovered through MySupermarket.com that Tesco Finest Canadian prawns were half price. Perfect. With a limitless budget I probably would have bought uncooked prawns for added flavour but the cooked prawns tasted fine.

The beauty of Clare’s dish is that it can be assembled and cooked in 15 minutes. Last night I decided to tweak Clare’s dish and turn it into a more substantial main course for four. Adding much more spinach and a layer of homemade dried bread crumbs and grated parmesan. Incidentally homemade dried bread crumbs are a synch to make and are an essential store cupboard ingredient here at the cottage. Somehow a topping made with this humble ingredient adds a great edge and dimension to the simplest of dishes. I’ve just checked my posts and discovered that I’ve never posted on how to make homemade bread crumbs – so will do in the next few days. They knock spots off the commercially produced ones.

This dish turned out spectacularly well. The topping was moreish and the extra spinach was a perfect foil for the gnocchi and prawns. We both had three helpings and there was still a little bit left. With a decent starter this would easily feed four.

Ingredients:
500g of gnocchi (I bought mine ready made)
275g of cooked prawns (frozen are fine but defrost before use)
200ml crème fraiche
450g of fresh spinach (washed)
5 tbsp of finely grated parmesan cheese
2-3 handfuls of homemade dried bread crumbs
Ground black pepper to taste
Method:
Wash the spinach and place in a large saucepan over a medium heat – lid on. There is no need to add extra water as there is plenty in the washed leaves. Stir every now and then until all the leaves have wilted. Strain the spinach water into a separate bowl. Put the wilted spinach in a warm place. I keep it in the colander with a lid over the spinach so it can keep on draining.

Pour the strained spinach water into the same large saucepan and top up with boiling water. Add a large pinch of salt and bring to the boil. Throw the gnocchi into the saucepan. After 2 or 3 minutes they will rise to the surface. This means that they are cooked. Remove with a slotted spoon to a warm place.

Set your grill to medium/high.
Place the spinach and cooked gnocchi in a large warmed entree dish. Pour over the prawns in crème fraiche. Add a good dash of ground black pepper. Scatter two tbsp of grated parmesan over the surface, sprinkle 2-3 handfuls of dried bread crumbs over the cheese and end with a final layer of grated parmesan. Place the dish under the preheated grill until the top turns golden brown.