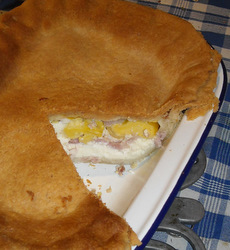 As a child egg and bacon pie was a traditional picnic dish and I loved it. This is not a quiche. The eggs are unbroken and the texture and flavour of the combination of short crust pastry, floury egg yolks, silky egg whites and thick cut bacon is out of this world.

I had forgotten all about this pie until The Chicken Lady served it when we went the Hampton Court Flower Show two years ago. I could have guzzled the entire pie but politeness made me hold back and only accept two slices. Since then I have dreamt about it, on and off.

Faced with a glut off eggs this week I was determined to make a bacon and egg pie. Danny was intrigued.
“We never ate this dish in Ireland.”
“It’s the sort of thing that you might have found in an Edwardian picnic hamper, served on proper plates with crisp white napkins and lashings of homemade lemonade. It sounds dull – no herbs and just salt and pepper – but it’s delicious. I promise.”

But could I replicate the dream pie? I sniffed about on the internet for inspiration. All the recipes that I found broke the eggs, used quiche dishes or streaky bacon. I wanted to make a deep pie with a lid. Eventually I rang my mum who agreed that a pie with a crust was the right place to go – more substantial and economical.
“As far as I can remember I put the bacon on the top. Back then bacon was cheap.”

I used my enamel pie dish. Having greased it I lined it with pastry, broke in six whole eggs and laid two slices of bacon over these. Then feeling like a latter day Mrs Beaton I added another six eggs, finishing off with two slices of bacon under the crust.

I backed the pie in Andrew (on the bottom rack with the extension collar on) for an hour at 175 degrees and let it chill completely before supper. I served it with a simple coleslaw using a fresh cabbage from the garden.

Danny loved it and normally he doesn’t like shortcrust pastry. This is a huge relief as I’d like to bake this regularly. Perfect comfort food for parties, picnics and lunches.

By the way this pie is very, very filling and cold easily feed six.

Grease a 9 ½ inch (24cm) pie dish well.
Roll out about two thirds of the pastry on a floured board and line the pie dish including the rim.
Crack six eggs into the pastry lined dish. Sprinkle with a little ground white pepper.
Place two slices of thick cut bacon gently over the eggs.
Crack another six eggs into the pie dish and finish off with the other two slices of bacon and sprinkle with a little more ground white pepper.
Roll out the rest of the pastry to make a lid for the pie. Make two small slits in the top and bake at 175 degrees for about an hour.
Chill before serving.