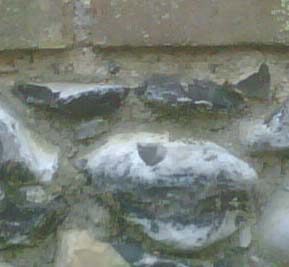 Photo: Dog in the flint

Min Pins are interesting dogs. They choose their favourite human companion and it’s for life. Love and picky vociferous loyalty for ever. The Contessa adores Danny. Dr Quito and Inca have chosen me. It‘s set in stone.

Years ago I had a chat with a Yorkshire Min Pin breeder. This tendency had caused him real problems.
“A man buys a pup for himself but the dog decides that he prefers his wife. Even if he bought another pup I couldn’t guarantee that it would favour him. It’s not who feeds them it’s just down to the chemistry.”

Dr Q is getting a bit long in the tooth at ten years old next birthday, so he doesn’t shadow me as much as he used to. Inca, three next birthday, fulfils this role and presumably reports back if necessary. They have always been close.

Inca is beside the front door wanting to join me when I leave for work or an expedition away from the cottage. But she is always left behind. My first Min Pin, Fly,  accompanied me on most trips but my life has changed and Inca wouldn’t be welcomed in the houses where I work and there are so many thefts of dogs from cars with open windows that I wouldn’t consider taking a chance with her. Like most pets our dogs are precious family members

But I do miss her during the day when I’m away from home. She is such an inquisitive creature. And she loves being involved in most cottage activities. When she was a small pup she watched me making a new dog ramp for Dr Q. Her head followed the path of the hammer up and down so closely that I wondered if she’d get a repetitive strain injury in the muscles of her glossy black neck. 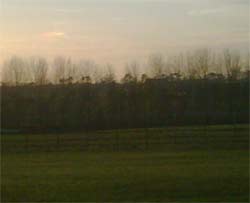 I am working at a large country estate at the moment. Sometimes I park Jalopy so that I can look at this view when I stop for a cup of tea late afternoon. But when the weather turns cold this spot can be a bit risky because Jalopy’s doors freeze up tight. I’ve had to clamber aboard via the boot in the past. In pitch black (this is the  deep heart of the countryside with no street lights) negotiating a car full of equipment and cans of paint was an interesting adventure.

So now I park against an old flint wall on chilly days. Initially I missed the view but I’ve discovered that this wall gives me endless pleasure. It’s is a flint wall version of the cloud or ink spot game. Here I see endless mythical creatures and wailing harpies. Last week I spotted a petulant dog. Study the photo at the top of the post carefully. The black spot near the centre is his nose. He even has eyebrows and ears. Can you see my flint Norfolk terrier? He has become a friend. 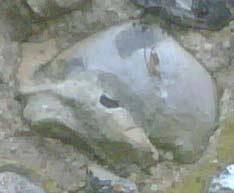 When I showed D the detail of a doll’s head, he could only see a sleeping dinosaur. At least he could see something!