Flowers from the garden: August 2009 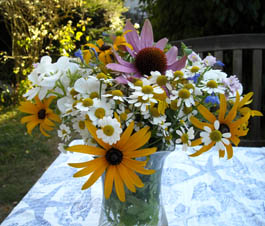 Photo: Flowers from the garden. August 2009

I suddenly realised that it was the last day of August so I had a wander in the garden and found these.

I’ve waited two years for this one eachinea flower. It hurt to pluck it but it just had to join this group. It is, after all, a celebration of flowers that you can easily grow in an English cottage garden.

Not having bought flowers since January 2007 has forced me to overhaul the herbaceous borders. They are now packed with flowers all summer. By adding plants from wayside stands and garden fetes, the transformation wasn’t expensive. It just took a couple of years and a bit of luck to get established.

I love the softness of garden flowers they look as though they breathe.