Frogspawn but far less frogs in the pond 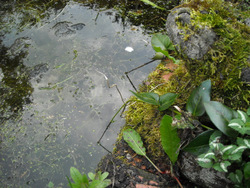 I think that my big pond cleanout in February may have rattled the frogs. Usually their annual bacchanal starts by mid March. Even though there have been a few frogs in the pond, there were loads of hopeful croaks but no frogspawn.
“Perhaps they are all the same sex.” I mused.

Last weekend when I was visiting TCL and S they proudly showed off their frogspawn. I was gutted. Why hadn’t I got some too?

But this morning the pond had frogspawn, in different areas than usual but loads of it. I’m delighted. But instead of the forty or so amorous couples as usual there are probably not more than four couples and a few singletons.

I wonder whether the frog population in our area has finally succumbed to the virus that is wiping out frogs in hoards in the UK.

When I cleaned out the pond I only found one dead frog under the thick blanket of weed. I also discovered about ten live frogs that had been hibernating in the sludge at the bottom of the pond. Apparently it’s the male frogs that hibernate at the bottom of the pond. Unlike humans the male frogs are generally smaller than the females. If you are interested in identifying which is which, the male frog tends to be the one on top of a pair.

I wonder where the female frogs hibernate? Any ideas?

Unfortunately a lot of the fresh frogspawn is floating beside a little stone raft. This is where the garden birds come to drink and bathe. Suddenly they have a fast food outlet too. They must be overjoyed by this miracle.

So I’m going to move some of this frogspawn to the little six foot pond to give these future frogs a better chance of survival.

I’ve spotted several tiny frogs, just a year old, in the garden this spring. These will not begin to breed until they are two or three years old. So a few out of the hundreds that we raised last year have survived. And there must be more in areas of the garden where I haven’t ventured yet.

I love frogs. They are great help in the garden as they eat slugs and snails. Apart from that I’ve collected frog things for over forty years. I even was given frog knickers once! When I see one in the garden I’m always tickled – for me it’s a lucky sign. My name was Frog at university after all.

When I moved here the previous owners had left a superb stone frog beside their pond. It took real strength to ring them and ask if they’d left it by mistake, as every inch of me wanted to keep it.

I was so relieved when they said that they didn’t want it and that it belonged with the pond. When the builders made the big pond, they christened him Albert. He’s in the photo above and needs his biannual de mossing.

I’m determined to do everything that I can to keep frogs alive and kicking on our patch of ground. If the same happens next year, I’ll start raising the spawn in aquariums, like my mum did 20 years ago.