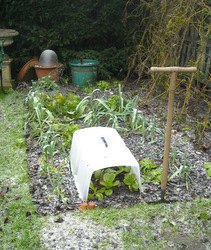 “Have you got a list of the props that you want for Christmas?” Danny’s words had me switching on the laptop in a trice.

Danny calls my gardening tools props as he doesn’t really believe that I use them all. He claims that they are mostly there for show. I must admit I do have a weakness for gardening tools and equipment. And have been known to splash out on something that was never really used – like my beautiful topiary shears

One of my favourite 2009 tools is a border edger that I bought after John retired. It has a good old fashioned cottage smallholdery feel. Before I had edged with a spade just as John did but this little tool makes the whole operation faster. I found on my travels across the internet that you can actually buy motorised lawn edgers. These are either battery operated or fuelled with petrol – a bit out of my price range at the moment. My edger combined with the edging shears keeps the borders in shape in the kitchen and herbaceous garden. And between bouts stands looking decorative on the edge of a border in the warmer weather. It was allowed out of the shed for the photo shoot today and then carefully hung up again.

for my birthday. Which will take its virgin flight when I plant the strawberry seeds.

This year I have asked for gardening equipment for Christmas. I spent a happy afternoon on the Harrod Horticultural site, making a list as my mum is giving me gardening presents too. The biggest present is this lovely leather kneeler that I know would be used constantly and become a real friend.  In case you are wondering, I chose brown.

Danny was very keen on this prop as it would stop all the kitchen scissors disappearing into the garden never to be seen again. And somehow the ball of twine always gets lost too.

My dibber (nasty green plastic) is also lost. This wooden one would be a great replacement.

I have never used a pot tamper and was seduced by this hand turned one in Jekyll yew.

And the last essential prop on the list is this seed and planting ruler. I’ve oogled this in several garden centres and made do with an old sewing tape. The great thing about this gadget is that it will make seed planting so much easier and far less wasteful.

And of course there are those overshoes.

As I spend so much time in the garden Danny jokingly suggested this allotment box would be handy. But even I can’t justify buying this although it’s a very neat idea.

And what did Danny want for Christmas? A pair of winter boots for Paris bought an hour before he left on Monday. He had to have his Christmas socks early too as none of his seem to match anymore. Perhaps the socks, the scissors, the dibber and the balls of twine are all conniving to fill any gaps in our Christmas lists.

A large parcel has just been delivered from Harrod Horticultural. With D away it’s very tempting to have a little peek…