Posted by Fiona Nevile in Plants and Bulbs | 20 comments 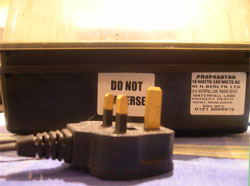 I’m determined to set some of my seeds tomorrow. I have a small electric seed propagator, the cheapest one from Homebase. It has no thermostat nor any bells and whistles. Over the past three years, this willing donkey has germinated hundreds of seeds and has become an old friend. Admittedly I am not asking him to germinate really crusty coated seeds, such as those from the palm plant. But C.P. (Cheap Propagator) has our future in his warm embrace. He is perfect for germinating tomato, sweetcorn and cucumber seeds.

An electric propagator is a good investment as it speeds up the germination process enormously. As C.P. only accomodates one seed tray at a time, the next ten days will be a bit frantic but not as bad as it used to be.

I use seed trays with separate cells. Not the trays with the small 1″x1″ cells. I start with the next stage up (2″x2″). With tomatoes, I sow a couple of seeds in each cell, thinning them by removing the weaker seedlings a week after they have emerged. Plants produced in trays of cells are easier to nurture later on as they don’t need to be pricked out (what is pricking out? See Tricks and tips below). Their roots are undisturbed so they have a better chance of developing into sturdy plantlets. The big drawback is that filling the cells can a bit of a palaver. The cells are filled with potting compost and then watered. The compost tends to sink. It is then topped up and, finally, when all cells are level, sowing of seeds can begin. There is no point in trying to rush this stage.

In the olden days, each tray was prepared separately as requires and time permitted. The propagator could sit empty for several days before I found the time to fill the next tray of cells with compost and sow another batch of seeds. Everything suffered. The seeds didn’t get the optimum time to grow into strong baby plants before they were planted out. I felt overwhelmed and Danny secretly fretted over the size of the autumn harvest of tomatoes.

I now have a system. I fill all the seed trays that I will need for the planting season at the same time. I use John Innes seed sowing compost (this feeds the seedlings for the first three weeks) and they are potted on to John Innes plant and seedling compost before planting out in May. The trays wait in an orderly row in the greenhouse. I sow the seeds in the first tray and pop it into the propagator. This sits on a south-west facing windowsill in the cottage.

I mark each prepared tray with its eventual contents and put the relevant pack of seeds beside it. I return home at lunchtime, make a sandwich for us both and check the propagator.

As soon as the seeds emerge, the tray is whipped out and I cart it down the garden to the greenhouse. Usually I put an ordinary propagator lid over the seedlings for a day or two for extra protection, even in the greenhouse. The difference in temperature from sunny snug cottage windowsill to greenhouse can shock the seedlings and set them back.

Then I sow the seeds in the next tray and bring them back up to the cottage and the welcoming arms of our trusty C.P.

Homebase no longer stocks my propagator but a much more expensive one.

similar to mine on Amazon.