Navigation Menu
Home » Fruit » Growing strawberries from seed. It’s well worth it in the end.

Growing strawberries from seed. It’s well worth it in the end.

Posted by Fiona Nevile in Fruit, Save Money | 3 comments 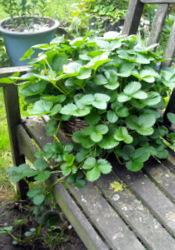 Do you remember my excitement over growing Florian strawberries from seed? And later, my frustration when they just didn’t seem to grow- just sat there the size of doll’s house plants?

Eventually I got fed up with viewing them though a magnifying glass and planted the five plants that had survived my fury in a large, redundant hanging basket. Not expecting great results.

I used ericaceous compost as I discovered last year that strawberries prefer a more acidic soil than mine. They immediately began to thrive – clearly they hated being cooped up on a windowsill in the cottage.

They are not “hanging” per se, rather lolling at the end of Danny’s garden bench. Yes we do have separate benches – D’s faces the cottage and mine faces the arch that leads to the kitchen garden.

They are the healthiest strawberry plants that I’ve ever grown and I’m now delighted with them. Even better, one is flowering and starting to bear fruit. They have masses of babies – too many to count. So for an investment of just over £4.00, I have five healthy parents with probably about 30-40 sturdy runners. Perhaps I’ll finally be able to make strawberry jam in 2011.

So in the end it was well worth growing strawberries from seed. I’m even considering growing a different variety from seed again. Nicky’s Nursery has some that can be sown in cold frames in October to fruit in May. But they are yellow.

Our other strawberries are dotted about in the fruit cages and now I realise that this is a mistake as we often miss the fruit. So I’m going to construct a small raised bed just for them. Strawberries should not have a permanent bed and need to be moved every three years for best results. It would be easier to move them to another raised bed than replace the soil in the fruit cages.

Meanwhile I’ve put some netting over my flowering Florian and set a mouse trap near the basket (be careful where you sit Danny). Hopefully birds and mice are not going to beat us to this longed-for treat.

Florian strawberries fruit on an off from Spring until the first frosts.