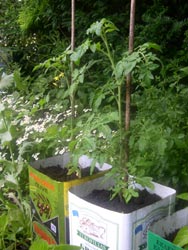 After the disaster of my tomatoes getting what I thought was blight, the replacements that I bought are romping along. Good sturdy plants and much better than the understudies that were waiting in the greenhouse. These are growing but in a thin and straggly sort of way. I should have moved them to the cold frame much earlier on. Meanwhile it turns out the tomatoes with ‘blight’ didn’t have blight after all. If they had blight they would have turned black weeks ago. They are happily growing out of the carrier bags that I put them in and looking very healthy.

I put two new tomato plants in the large olive tins that I was given by the River Farm Smokery and they are doing really well in the kitchen garden. It was easy to prepare them for their new life as kitchen garden vessels. I took the tops off with a can opener and made lots of holes in the base of each tin with a hammer and a large nail (this made an enormous amount of noise and was rather fun). Each can holds about 18 litres of earth. They will have a bottle of reserve water when the weather gets a bit warmer.

Meanwhile, the decorative tins are giving me enormous pleasure. I have spotted them in gardens and on balconies abroad. Now I have my own. As they are a decent size there is no fear of them blowing over. Ah the joys of recycling.