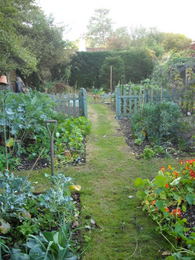 Photo: view towards the cottage

I thought that you might like to take a peek at our extended kitchen garden. Some of the paths are new and no rain for weeks has taken its toll but over the winter they will perk up.

The layout is nine 12’x12’ beds and we are planning an 8’x 8’ asparagus bed. I traded some decorating for the wood (it’s going to be a raised bed with new top soil from the Fens).  This means removing the last of the roses and it’s a project earmarked for next Spring. We’ve discovered that the old kitchen garden – the part enclosed by the blue picket fence – is not nearly as fertile as the new kitchen garden.  It is much stonier too. The latter was the kitchen garden tended by the basket makers all those years ago. We noticed that the roses in the rose walk grew so well and the lawn was greener in this area. So this Spring we dug up the lawn and Danny planted Maris Piper potatoes – lovely flowery spuds that the Irish adore.

When I realised how great the soil was in this area I made the hard decision to ditch the rose walk border and double the size of our patch. We struggled to clear it. John had retired and it took us days to remove the roses. There are still rose babies trying to become part of the action. 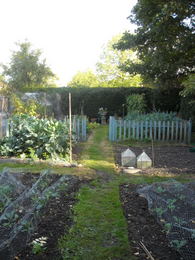 Now I reckon that we have a big enough area to provide most of the vegetables that we need each year. Admittedly some have to be frozen but a lot can be dried in the dehydrator and added to soups, casseroles and stews in the slow cooker.

Until this year growing vegetables has just been a February to October project. Now like the mouse farmer I survey our October garden with delight. We have Brussels Sprouts at all stages of growth – mainly Bedford Fillbasket. Next week we can harvest some but we’ll have some for Christmas and well into the new year. We can harvest young kale – Frosty and Black Tuscany now but have enough plants at various stages of growth to last us all through the winter. Other varieties include Cavolo de Nero and Redbor. We have greyhound cabbage ready to harvest but will happily sit in the ground for weeks. Our baby and half grown specimens include an unknown Savoy cabbage that we’ll harvest before Christmas, Savoy cabbage Wintessa (harvested January), cabbage January King, Excel and Wintergreen. The latter three will be harvested from December onwards. Danny loves cabbage and I do too if it’s really fresh.

We are still harvesting small summer caulis – Cauliflower Lateman and have a row of Cauliflower Alpen which we will harvest from January.

We have about 10 calabrese plants (again an unknown variety donated by a client) – I definitely will be planting more next year as they are prolific and much tastier than the supermarket stuff. We are starting to harvest the younger ones now.

We also have salad and stir fry leaves. I bought a collection of seed packets knocked down from 17 quid to a fiver at the Marshalls Seeds stand at Hampton Court. These include Spicy greens mix, Pak Choi (Ruby shine), Baby Chinese cabbage, Pak Choi (Ivory), spring onion (Gaurdsman), Shungiku (Chop Suey Greens), radish (purple plum), rocket Oakley, lettuce Dazzle and mustard Red Zest. I have Land Cress and Mizuna to sow in the big kitchen garden pots now the courgettes have finished. I’ve invested in yards of fleece for when it gets frosty. As I harvest I’m planting more spring onions, salad and stir fry leaves in the ground. 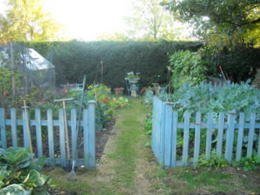 Photo: A gate to the old kitchen garden

We still have the last of the runner beans – White Lady and an unknown but tastier variety donated by John. I’m going to dry these seeds by leaving the beans on the posts until February.  The leeks – Musselburgh Improved – are at different stages of growth from biro to ultra slim rolling pin. We have a row of Swiss Chard that we’ll start to harvest in about a months time. The parsnips – Improved Hollow Crown – are looking strong

Meanwhile we have 46 purple broccoli plants (unknown variety from John) and a row of white sprouting broccoli plants – White Star. Hopefully we’ll be harvesting these in March and April 2010. 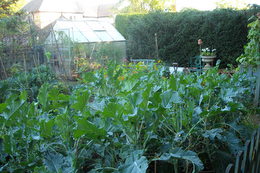 In the greenhouse, we are hoping that with some gentle heat our chilli and pepper plants will ripen and flourish as they went in very late this year. I have harvested about 20 kilos of tomatoes (from the greenhouse and outdoors). There are at least 10 kilos still ripening. The cucumbers are doing well and we have one melon – small but perfectly formed.

The summer squash have been brilliant but are now slowly coming to a standstill. Our butternut squash was a disaster – producing just one lonely baby that is now drying for the winter.

And best of all the Autumn Raspberries are being guzzled daily, we are still plucking rhubarb and there are grapes on the vine behind the pond.

Of course a lot of our plans are hopeful projects – I tried sowing salad leaves under fleece last year. Even though they were put in late, they germinated but just became a wonderful slug restaurant. This year I’m going to be super vigilant as I have so much more invested.