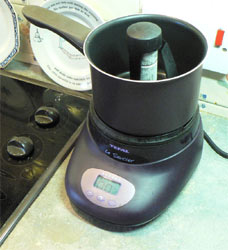 I recently met Rodney at a dinner party. Like us he is a foodie. He has been a journalist for over 50 years and is still a motoring correspondent. We have just discovered that we live in the same village.

There are some things in the kitchen that are so useful you worry that they might break and leave you floundering. In my case that thing is so rare that I wonder how other people manage without it.

I am talking about the Tefal sauce maker or “Le Saucier”. I was reminded of this when I read of your efforts with Bechamel sauce, something Le Saucier takes in its stride.

Briefly it is a gadget which has its own specialised saucepan and its own heat source. You programme time and temperatures from a little window on the front, chuck in the ingredients and let it get on with it. It stirs and heats and generally produces a no fuss sauce or gravy. Now you can concentrate on that tricky recipe or culinary masterpiece without having to spend time stirring away on the top of the hob.

Mine came from Lakeland many years ago so I rang them to ask how much a replacement would cost when mine goes to the great kitchen in the sky. They just didn’t do it any more, they said. So I rang Tefal in the UK who were most helpful but said they did not import it any more.

So I pinned my faith in French cooks and went to the Internet where I found it, but apparently now being made by a different firm. There is no doubt it is the same item although now finished in white instead of a dark gravy brown but getting at it is not going to be quite so easy.

I can negotiate the French websites OK but most of their firms want you to register with a whole host of details before they will consider posting the item to you. I have decided that when I am on holiday in the French Alps this summer I will make a point of visiting the local electrical stores to see if I can track down Le Saucier.

Which leaves us with the mystery of why such an incredibly useful device which frees up so much kitchen time, should be so little known and so little used? To me it is a bit like discovering that when my potato peeler dies there will never be another one.

If any of your readers can shed any light on this I would be very grateful. And should I find the Holy Grail, and if anyone cares, I will bring you up to date with the details.

– a bit cheaper than a day trip to France.