Navigation Menu
Home » Discoveries » Have you heard of Rootgrow?

Have you heard of Rootgrow? 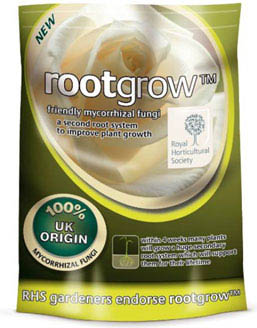 This is organic friendly fungi that I have been using this summer, when planting perennials, roses and shrubs.

KateUK mentioned it in a comment on the blog and when I spotted Rootgrow in the garden centre, I invested in a pack. Everything that I planted with a sprinkle of Rootgrow crystals has flourished. So if you are planting this Autumn you might consider investing in a pack to give your plants the best possible chance.

Rootgrow is a  mycorrhizal fungi that creates a secondary “root” system. So a plant has double roots to absorb water and nutrients. This is particularly useful in hot summers and for plants that are growing in challenging soils. In sandy soils the fungi root system acts like a sponge to hold water, in clay soils the fungi break down the clay, unlocking nutrients. Apparently Rootgrow also overcomes rose sickness in soil – so you can plant roses in the same place.

Researching for this post I’ve discovered that Rootgrow can be used on vegetable and fruit plants too. So next year I’ll definitely try planting my tomatoes and strawberries with a sprinkle of crystals. Unfortunately brassicas and ericaceous plants – such as azaleas are not affected by Rootgrow.

If you have problems with honey fungus, Rootgrow can help with this too. The good fungus will attack the bad one.

The instructions suggest 20g is the correct dose for a shrub or rose bush. Overdosing is pointless apparently. For smaller perennials I just used a large pinch when planting. My dahlias have done really well this summer – planted in very free draining soil, I was worried that I would be watering them constantly. So I gave each plant a dose of Rootgrow and it seems to have done the trick.