How to cook puffballs recipe 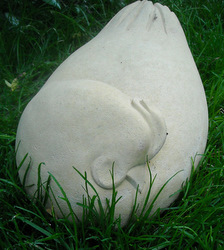 Photo: The memorial for Mrs Boss

“I want Mrs Boss to have a memorial. She deserves it.”
Danny was warming his hands over the wood burning stove. He had just finished burying her in the garden. It was March 2009.
“They have some nice Willowstone chickens at the garden centre. I’ll get one. I know that they are well under £20.”

But when I visited the garden centre there were no chickens on display. In fact it has taken me all this time to discover that the stone garden ornaments had been moved to a different area. Last week I chose the chicken that looked most like Mrs Boss and returned home in triumph.

It may seem a bit weird that we loved a chicken. Mrs B was no ordinary hen. Scruffy and independent, she had a strong personality and taught us a lot about chicken keeping over her long life. Somehow she crept into our hearts and we still miss her.

We decided to set the sleeping hen beside the back door. As Mrs Boss was buried in a border, the stone chicken would be lost amongst the flowers.

Imagine my horror when I came downstairs and saw this on the table. I reckoned that Danny had kicked the statue (by mistake) and broken of the head. When I lifted it up tenderly it was strangely light. Then I suddenly twigged – it was a puffball. 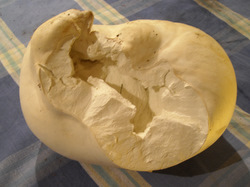 But where had it come from? Danny explained that someone had given it to him in the village shop.
“How do we eat it?”
“Apparently we fry slices in oil and butter, with salt and pepper, until golden brown. Some say that it tastes like steak.”
It was delicious. 15 minutes each side on a very low heat (like 1.5 out of 9 on our halogen cooker ring dial). Not really at all like steak but good and meaty with a very delicate flavour. More like chicken than beef steak.

If you live in an area where horses are kept you are most likely to find a puff ball in a paddock. Until yesterday I had never seen one but I will keep my eyes peeled from now on.

Meanwhile, the Mrs Boss memorial happily sleeps beside the back door. It needs to weathered a bit to be like Mrs Boss – who never had dust baths marked as a high priority.