Navigation Menu
Home » Flowers » How to grow the best wallflowers

How to grow the best wallflowers 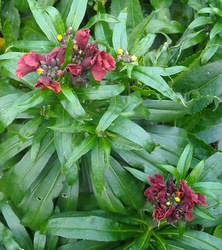 When my mother married my step father she asked him if there was anything that he particularly wanted to see in our new garden.

“Camellias and biannual wallflowers.” Was his instant response.
My mother was a very keen gardener but she had never grown these plants. She mentioned years later that she hadn’t been happy with the wallflower request at the time.
“They seemed to me such an ordinary and dull little plant. But when I smelt the heady scent, all was forgiven.”

The trick with wallflowers is to plant them in large drifts rather than the odd one dotted here or there. They need a sunny spot, can be grown on poor soil but respond well to a good mulch on planting to keep them moist. If they dry out they can quickly go to seed. Planted along the edge of a path they are a joy. Combined with Honesty (Lunaria) or Forget me nots (Myosotis) they can look stunning. But one of the main reasons for growing wallflowers is their heady honeyed scent.

Like Sweet Williams, these biennials need to be sown a long time in advance. I sow the seeds in modules at the end of May beginning of June. When they are large enough to handle I pot them on into 3” pots and keep them outside in a spot where I will not forget to water them regularly.

Wallflowers like a sunny, well drained spot. I try and plant them out late August early September so that they have time to settle well into their final positions before the weather gets cold. When planting (6”- 8” apart), I nip out the tops to promote bushy grown and mulch with home made compost. Usually they start to flower in March or April and if regularly dead headed will continue to flower for several months.

2010 was a busy year for me. I bought wallflower seeds to sow in early June but forgot about them. So in September I ordered some wallflower plugs and planted them immediately on arrival. They survived the big winter freeze of 2011 but in the spring not a single plant flowered – I was so disappointed. Over last summer the plants grew voraciously and have been flowering on and off since October 2011. They have finally given me far more pleasure than if they were flowering at the ‘right’ time of year.

My favourite mix of wallflowers is Persian Carpet Mix (RHS Award winner). This contains all the colours of a lush Persian carpet and smells glorious.

N.B. Wallflowers, being part of the cabbage family, are prone to attacks from flea beetle. If you are planting them in your kitchen garden keep them well away from the brassicas!