How to make simple and strong raised beds for your garden

Posted by Fiona Nevile in General care, Save Money | 7 comments

Our cottage is set quite a way back from the road. We like this as it gives us a lot more privacy than a house set beside a pavement. This front garden faces south west and is a much warmer and more protected spot than the kitchen garden – which lies in a bit of a frost pocket.

Last year we extended the long south facing herbaceous border that runs from the gate to the cottage. This year we decided to use some more of the front drive for raised beds. Our drive is full of rocks and the soil is heavy clay – so raised beds seemed like a good idea.

If I was going to the palaver of making some raised beds, they had to be large and substantial. Some farming friends had made a series of rather nifty raised beds out of old rafters. Good solid beds that looked as if they’d last for years. This was back in my decorating days. When I spotted a pile of these rafters in one of their barns I bartered some painting for rafters and stakes.

Two years later I finally pulled my finger out and started to make the raised beds this week. The design is very simple, an 8’ square, 8” deep. The sides of a raised bed must be at least 6” deep and even deeper if you are planning to grow parsnips or anything that has long roots. 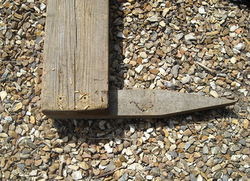 Deatil of stake before being attached to the wooden board

There are two key rules when making raised beds. Attach strong pointed stakes to two sides to make the beds firm and stable. The other sides butt up to these and are secured with long coach bolt screws – these have square tops so can be driven into place with an electric drill.

The other vital point is to make sure that each side is level and that the corners are square. If the ground isn’t completely flat this might take a bit of digging and jiggling around.

I couldn’t find the right length of coach bolts locally so as a semi temporary measure I used galvanised nails. Trying to force 5” nails through the rafters and into the oak stakes was impossible with an ordinary hammer so I wielded a fencing hammer with good, fast results.

Today we have been filling the first bed with Fenland soil. Beautiful stuff, dark and friable. We bought it from Madingley Mulch – and I reckon that it’s well worth the investment. Trying to improve the poor soil in the garden has been a real bane these past few years. Expensive too. We’re slowly getting there – the vegetables in the kitchen garden are looking much stronger and bigger this year.

My farming friends used potting compost to fill their raised beds. I reckon that this was a mistake as it just doesn’t have the welly to provide a really good growing medium year after year.

It’s great to have good soil to start with in the raised beds.

When the bed is filled with soil (leave at least 1.5” space at over the soil to avoid run off) water the soil well and leave for a day or so as to allow the watered soil to warm up. The soil will drop a little so fill up and rake smooth. By watering well before planting your plants will have a good reserve of water to draw on from the word go.

We have also discovered the joy of turning pallets into something even more useful. We have plans for a few smaller raised beds for yet more salad and samphire! These have to be well out of the way of boy racer reversing though.