Improving the soil in the old kitchen garden 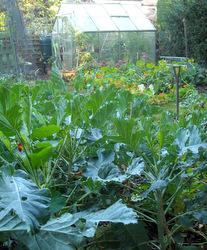 The secret of successful growing is in the soil. Poor soil will always give iffy results however much time you give to watering and TLC. So this year I was determined to continue to improve the soil in the old kitchen garden. Things do grow there but they are not as luxuriant as the plants and roots grown in the new kitchen garden. We discovered the basket weavers’ kitchen garden three years ago when Danny decided to grow some spuds in a new border. The lawn here had been very green and lush. A clue that I’d ignored until then.

“Of course he had those pigs.” Declared Doug, over the fence. “He did grow beautiful cauliflowers. Used to give them to me sometimes.” His eyes twinkled at the thought. “Tight as a chick’s arse. But not with his veg.”
Perhaps this year Doug will be presented with a few cauliflowers from me if all goes well.

Last spring I dug in a mix of manure and compost. Top dressed with Rockdust  and things improved. Rockdust is well worth investigating if you have poor soil – serious trials in America and the UK have proved that it has good results. Scratching about in the summer, I noticed that there were a lot more worms and better growth all round. But the patch was still eclipsed by the new kitchen garden.

This year the spuds are going into two of the old borders – as these are the floury ones that Danny adores – I’m determined to get a good harvest. We are hoping to harvest over 100 kilos after all.

Cleaning out the big pond went on for weeks. About six inches of muddy silt was dredged out of most of the bottom – I still need to do more but it has to wait until after the annual frog and toad fest. The one thing that kept me going was sloshing the dark, gooey goodness onto the borders. The old kitchen garden got a top dressing of about an inch/2.5cm of this loveliness.

Then I decided to shift a lot of the compost from the giant heap – years of grass clippings have turned into a gorgeous friable mix. I plan to clear half the pile and start composting using a much faster method. So barrow loads have been dug out and trundled to the borders and spread at a level of about two inches/5cm.

This year, I knew that the barrowing of sludge and compost would be onerous so I ordered two big tubs of organic concentrated farmyard manure. After all the hard work this was fun to spread – nice and stinky but a doddle to apply. Finally I mixed the three layers using my trusty three pronged tool – the Wolf Multi-Change Soil Cultivator

. This is like a long handled plough and is extremely effective. No need to fork over and stand on the border. I have a smaller one, inherited from my Aunt Pickles. Hers is handy but the bigger one is superb for preparing borders in the kitchen garden when you mainly start from scratch every year. The gardener’s equivalent of a KitchenAid. Seriously, check them out especially if you have barrow weariness.