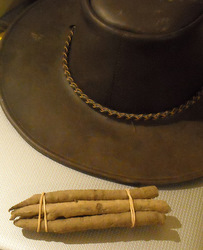 Cigar anybody? No they are seakale thongs

Many years ago, when I was just a newbie herbaceous gardener a friend came to stay with her mother. Her mother bought me the book The Victorian Kitchen Garden

by Jennifer Davies. As I wasn’t actually planning to grow vegetables at the time it was put on my books for later shelf.

I had no idea that suddenly it would come into its own this year. Here I found details of making hot beds and so much more. OK Victorian kitchen gardens were labour intensive but I do have time on my hands and if you cut out things like expensive hothouse boilers, so many of their methods apply today. Such as how to keep a bunch of grapes fresh for weeks after picking. Leave a long stalk when you harvest and put it in a cool place with the stalk in an almost horizontal bottle of water.

Incidentally this book is available on Amazon for just 1 pence!

I have been working on a post on perennial vegetables for quite some time now. I got very excited when I discovered that there are loads of these around. The post has finally overwhelmed me – the subject is just too big for one post. So I’m going to do a few posts that focus on perennial veggies that I think are worth growing.

Of course there are the standard ones that most veg gardeners with a bit of space grow. Asparagus, globe artichokes, Jerusalem artichokes, Welsh Onions and of course herbs – thyme, winter savoury, parsley, chives, oregano, French and Russian tarragon to name just a few. But there are others that I’d never considered before this year.

The Victorian Kitchen Garden introduced me to one. Seakale. The more that I read about it the more that I wanted to grow it. As a flower grower I loved the sound of honey scented flowers in the summer and as a foodie the idea of forced Sea kale shoots over winter and into spring was seductive.

I ordered some Seakale seeds but failed to get them to germinate. Since then I’ve discovered that they are easy if you carefully remove the corky outer case. If you grow Seakale from seed you are looking at a three to four year wait before you can start forcing it. I’m already doing the ‘waiting for/tending asparagus three year run’. Will I actually be alive in three or four years time?!

Although the years seem to fly by, only one more year to go before we can eat our homegrown asparagus, I was tempted to spend to save time. So I invested in some Seakale Angers thongs – at £14.95 for five they seem expensive. Danny was shocked at the price. But these plants have a lifespan of at least five years (some people say ten) so even if you don’t take root cuttings they will only cost a maximum £3.00 a year for a delicate and tasty treat. And that’s what this site is all about – living a good life for less. You can harvest your own thongs after three years for new plants. In fact Danny suggested that selling thongs could be a good source of income in the future.

So managed well, these thongs are actually not as expensive as they initially appear. They can provide tasty treats and a possible income stream year after year.

Planting the thongs is easy. The convention is that the top is cut straight across and the base at an angle. They like a sunny open site. Prepare your Seakale bed well with lots of organic compost from your bin – they will be living there for some time! Using a dibber plant the thongs so that the top is covered by 1”/5cm of soil. Set the thongs about 18”/45cm apart. Pick the flowers as they appear, feed them occasionally and water when it is dry. Leave them to romp away and build up their strength during their first year. Start forcing them in the winter and spring of their second year.

I can’t wait to taste this bounty!