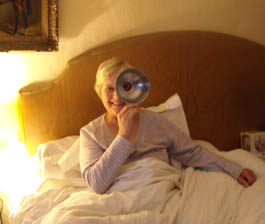 might have had hanging in her kitchen. For years I’ve found that filling jars with hot jam, marmalade or chutney has been a messy business. My mum advised putting the jars on newspaper before filling – which is a good trick as you throw away the paper and the mess in seconds. But you still have to deal with the sticky jars.

Lingering in Newmarket this week I spotted a preserving funnel on sale in a kitchen shop. At half price, it was irresistible. I’d been keeping my eye out for one since Kate(uk) mentioned how good they were in a comment on the blog.

Filling jars with homemade passata I overfilled a jar and the extra passata stayed in the funnel and didn’t spill. Later I made some crabapple chilli jelly and filling the jars was a doddle. No mess, waste or cleaning up palaver.  Brilliant.

and Westfalia has a cheaper, similar one. Update: I’ve just spotted that Lakeland has a non stick one for a good price.