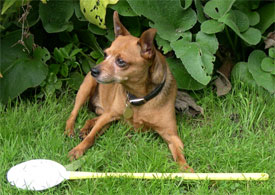 Dr Quito is my favourite dog. He is the steadiest, kindest dog that I’ve ever lived with.

He was the first pup that we chose together. And as Danny says, “Our best boy.” When he arrived as a tiny eight week old pup Danny insisted that he slept beside our bed. He’d let Quito drift off to sleep on our pillows before lifting him gently in his palm and tucking him up in the half avocado box that was his basket at the time.

At 10 months old he had a terrible accident on the Newmarket Gallops. He was coursed by a lurcher. The owner stopped briefly to assure us that our dog would be fine as her dog was only playing rough. I grabbed Quito, wrapped him in my jacket and we drove home. Back home we quickly realised that he was paralysed and in a bad way. He was in shock and bleeding profusely. The locum vet (it was a Sunday) referred us immediately to the Small Animal Hospital attached to the Veterinary School in Cambridge. He had severe neurological damage and if it hadn’t been for the hospital’s superb care, he would have died.

Quito’s accident put us in a quandary. As he was paralysed we didn’t think that it was fair to keep him alive. We are not keen on dogs being kept on if their quality of life is poor. We were persuaded by the hospital vet to give him a chance. They assured us that he would probably walk again.

The months that followed were pretty tough for Dr Q. Movement returned to his front legs within a few days but it was several months before his back legs recovered enough for him to run unaided. We waited two months for movement in the back legs to return, as friends and family tactfully suggested that it might be best to release him into oblivion. We’d agreed to follow the hospital’s advice so we ignored their comments and continued to work with Quito. I must admit that I didn’t hold out much hope for the pup and thought that he’d probably have to be put down within a few months.

We would walk with him in the garden holding his back legs wheelbarrow style. And then, one wonderful day, his legs started to kick back in a skating motion. I released his legs and he shot forward, back legs pumping hard. Since then he has continued to improve a teeny bit each year. He will never be able to jump on the sofa (every dogs’s Brandy and Soda) or climb the stairs. He still walks with a curtsey step, back legs that suddenly cross over if he tries to move too fast when he spots a pigeon. He has to have a ramp to get in and out of the cat flap.

We are lucky that we have a large garden. He seems to be happy running about the garden hunting for intruders and his favourite time is a Saturday morning when he snoozes in the human dog basket with me and pretends to read the papers. We don’t take him for walks though. If he sees a large black dog, of any type, he becomes totally distraught. He loved the Gallops. I just hope that he relives the best walks in his dreams.

Six years on I find it hard to forgive the owner of the lurcher for not putting a muzzle on her dog before she opened her car door to let him run free. When we eventually traced her through the local paper, we discovered that she was a vet working at a local practice. We were horrified that she just walked away without even examining our dog.

Having heroically survived this trauma Quito was awarded an honorary doctorate.