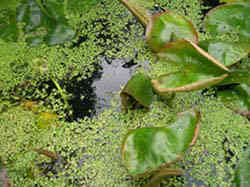 The newt pond lies in an overgrown corner of the garden. It wasn’t planned as a newt sanctuary. Initially the pond was installed for treating sick fish. At six feet across, the pond holds roughly 100 litres of water. The big pond holds about 8000 litres.

I reckoned that it would be much cheaper to treat ailing fish in a small space until the fish experts at Byways Water Gardens pointed out that a sick fish can be treated in a large washing up bowl. So I put a couple of goldfish in the pond to keep the mosquitoes under control. When the fish died, I left the pond alone and used it for raising frogs in the Spring. I had no idea that newts were breeding there as well.

One day I was peering in and noticed a newt swimming quickly away from me into the depths of the pond. Its tiny feet were splayed out like stars. I was entranced and spent hours lying on the grass watching the newts. Newts are extremely shy but if I kept very still they would forget I was there and carry on swimming together and floating near the surface to catch small flies.

Once I got back very late and took a torch down to the small pond, curious to see if anything happened after dark. A newt was dancing at the bottom of the pond, oblivious of the torch light. She moved one front leg and then the other in a supple arching motion. The little ballet continued for several minutes until she slowly swam away into the darkness. I discovered later that she was laying and placing her eggs one by one in the folded leaves of pond plants.

During my Mother’s frog and toad breeding years she raised a newt. We had moved the tiny frogs out of the aquarium and down to the pond. We left the empty aquarium on the side for a week as I didn’t have time to clean it out before I went back to London. The next weekend I noticed a teeny movement as I passed the aquarium.

The baby newt had enormous eyes and legs so thin and transparent that my Mum was convinced it was a fish. Steadily the newt grew into a small strong male, swimming about when we were out of sight and hiding behind the pebbles in the tank if anyone came near. We put him into the pond at the end of the summer. I do hope that he survived.

You can get good pond filters at All Pond Solutions.