Our honey bees are dead 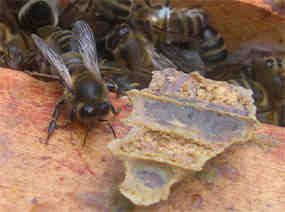 Both of our bee colonies have died.

They’d been flying on sunny days since January. I was so pleased that they’d survived the winter. Two weeks ago I noticed that they weren’t flying about, even on the best days. Last weekend I was working in the borders near the hives and noticed there was no activity at all. And none in the mornings when I went down to the chickens. Today was mild and warm so I decided to dust off my bee suit and investigate.

I opened up the small white hive first. The bees were motionless, clustered between the frames with one solitary bee on the top of the frame. The larger colony was similar. There was plenty of food in the brood chamber as well as the supers above. It hasn’t been unusually cold for the time of year. We treated them for varroa mites in the autumn. What had I done wrong?

Shocked, I rushed into the kitchen and I looked on the internet for reasons but drew a blank. Bees die in the winter but not whole colonies. I should have looked on the DEFRA site. When I had calmed down and dried my tears, I rang my Bee Mentor, Mike Hastings. This man is a dinger – he drove over from Newmarket immediately with his magnifying glass.

He opened the small hive first and examined it. Basically the bees just hadn’t had enough food to survive the winter. I felt terrible. We had left them with stores and fed them over the winter. Mike was kind.
"I’ve lost colonies that wouldn’t access the stores in the supers. This happens to loads of beekeepers."
I thought I had seen capped honey on the brood frames but it was just the base of empty cells that had been accessed from the other side.

The larger hive was a mystery. There was a massive amount of food in the supers and inches from the dead cluster of bees on the frames in the brood chamber. Mike rang the bee inspector, Lindsay Sampford, who suspected "resistant mites". These are varroa mites that are resistant to the Bayvarol or Apistan strips that are put into the hives to kill them in October. We’d put in the strips. I hadn’t heard of resistant mites until last weekend. I had completed a pretty intensive evening course last spring. At the end of a long working day I had probably nodded off during the vital moment. Who knows?

Varroa mites are nasty. This is a parasite that feeds on adult bees and infiltrates brood causing massive deformities and reducing resistance to infections. Had vaorroa mites weakened my colonies of honey bees?

Lindsay Sampford arrived early this morning. He zipped himself into his suit, donned his gloves and examined both hives very carefully. He took a frame and samples from the varroa board to be analysed. We have open mesh floors on our hives (varroa floors) with a white board beneath the floor. The dead mites drop onto this and you can easily see the level of infestation. If a varroa mite drops off a bee, it falls through the mesh and it’s curtains for the mite as it cannot jump onto another bee.

Lindsay couldn’t see any evidence of resistant mites and his conclusion was that both colonies were too small to survive the cold snap of a couple of weeks ago. In the big hive, the brood in the frames indicated that the queen had started laying. It seems that it was just bad luck. Perhaps the analysis of the frames and the board scrapings will throw something up. The results will be posted when I get an answer.

There are Bee Inspectors in every region. They have started working a month earlier than usual this year as beekeepers are experiencing so many problems, particularly with "resistant mites". There is also the possibility that the Small Hive Beetle (Aethina tumida) will turn up in the UK. This has devastated honey bee colonies, in Africa, the USA and Australia. Foul Brood was found near Cambridge last year, so everyone who knows what’s what is on red alert.

Beekeeping clearly now requires much more diligence and hands on action to keep your bees healthy. Inspectors do a great job as they have the experience to pinpoint and confront a problem before it gets out of control. If your bees are diseased they can spread infestations to other colonies in your locality.

This is where DEFRA steps in. Initially the responsibility lies with you. It’s important to gen up on what is happening in the UK. If you think that you have a problem, the first step is to ckeck out the beekeeping section of the DEFRA site . If this doesn’t answer your questions, contact your local Beekeeping Association. If they can’t resolve the issue they can put you in touch with a Bee Inspector. The Inspector’s visit is free at the moment. I suspect that they are massively overstretched.

Lindsay told me that the old treatments (Bayvarol and Apistan strips) cannot kill resistant varroa mites. Apiguard is the recommended treatment now, with an application of Oxalic acid during the winter when the queen is not laying eggs and there is no brood. Both these treatments are available from Thorne’s (with instructions). I wasn’t aware of this. New problems with colonies seem to be developing quickly. I reckon that one way of keeping on top of these is to check the DEFRA site regularly as the pests and diseases section of my beekeeping books are already out of date after just one year.

Even though Lindsay kindly went through all the latest DEFRA literature with me and left me all the updated literature, I will be checking the web site on a monthly basis, from now on. This site is excellent and the latest reports and leaflets can be downloaded in pdf format: http://www.defra.gov.uk/hort/Bees/Health/index.htm .