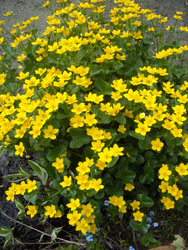 As The Contessa is diabetic she has daily insulation injections. These are given after a meal. Having devoured the large rotting fish and disposed of the same all over the downstairs of the cottage, she clearly wasn’t up for breakfast.

The emergency vet was calm.
“Starve her for the day and don’t give the insulin. She’ll be fine to miss it for a day.”
The Contessa lay on the sofa, under a thick rug. She slept all day, snored through the rugby, enjoyed lots of attention and the next morning she was fine again. That little dog must have a stomach of iron. People can die of fish food poisoning.

Meanwhile we worked on in the pond. I found another dead fish in the reeds and a strange calcified part of a fish in the shallows – any ideas how this happened. These were rushed to a place of safety – the dustbin – before any other Min Pin fancied a snack. These fish had survived for over five years without us even knowing that they were there. Both about a foot long, they were sizeable. I think that they were tench – these are ground feeders and stop the silt settling in the bottom of the pond. So they are best avoided if you want a crystal clear pond. They were a present from a good friend about ten years ago so we couldn’t say “Noooo”.

D and I worked together in short bursts. Moving the silt and hacking back the plants is heavy work. In the end I reckon over the past few weeks we’ve covered an area of 100’x100’ with a thick 2” layer of silt. Impossible without a really good builder’s barrow and sturdy net. There are still more areas of the kitchen garden to cover but that can happen next year.
“Next time let’s tackle this on a sunny day.”
Danny was shivering. It’s warm in the Rat Room and he’s not used to working outdoors. Even I was cold. At dusk yesterday we decided to refill the pond.
“We can re pot the pond plants next year.”
Guess who said that?

So now our pond is refilling – it takes a good 10-15 hours. We still need to sluice out the big filter box and replace the UV light bulb but we’re nearly there. We’ve ordered a new switch box. We’ll let the pond settle for a week or so and then we will be looking at fish. Nothing exotic – just small goldfish and shebunkins. For a splash of colour, mosquito egg eating and interest. And we’ll be following Paula’s advice and stretching a fishing line over the pond to deter the dreaded heron.

The Small Pond, refilled as we drank a mug of tea, will remain a wildlife pond. I know that fish and newts eat tadpoles and that fish also eat newt eggs. But we have a lot of frogs and newts clearly breeding happily in the garden. Even when we had a very well stocked Big Pond, loads of froggies, toads and newts spawned and survived. The size of The Big Pond means that there are reedy areas where tadpoles and baby newts and toads are comparatively safe.

It’s been a long haul but worth it in the end. The prospect of the sound of water, a healthy pond and fish has me smiling as my fingers fly across the keyboard. Roll on summer.