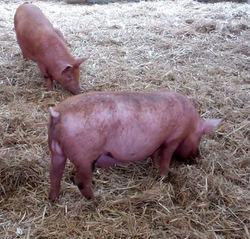 The Chicken Lady, who writes the excellent blog Kitty’s Super Allotment, was cooking pigs’ cheeks with apples when I popped in a few weeks ago.
“I think that the butcher just sliced them off the head. Look there’s a piece of ear.”
Initially I felt a bit squirmy about tasting this dish. But these were quite delicious – the skin crispy yet soft and the meat similar to slow cooked belly of pork.

Celia from Purple Podded Peas had mentioned pigs’ cheeks to me ages ago and I’d forgotten all about them. In fact at the time I secretly thought.
“Pigs’ cheeks? Yuk. Probably similar to those rubbery pigs balls that I ate in Majorca. The latter was hailed as the Treat of all Treats as the post castration village supper. ”

Time has moved on and I’m willing to try almost anything these days.

Gliding past the Waitrose meat counter I spotted pigs’ cheeks in the forgotten cuts section. The price was £2.99 a kilo! These didn’t have skin but the price encouraged me to invest in 500g there and then.

The lady butcher shared her recipe. “I sliced a large onion and sautéed it slowly with balsamic vinegar until the onions began to caramelise. Then I put the onions and chopped pigs’ cheeks into the slow cooker. I covered them with dry cider, added sage and simmered them for about three hours.”

I had some cooking apples knocking about in the kitchen so added some of these a la TCL. Danny loathes sage so I added thyme instead. The resulting dish was sublime, melt in the mouth pork in a gorgeous, rounded sauce. This dish would feed four greedy people and could be padded out a bit with vegetables to feed more. However we enjoyed having freshly steamed veg as they balanced the richness of the dish.

1 large cooking apple or 2 medium ones (peeled and quartered)

Method:
Sauté the onions gently in the olive oil for a couple of minutes and add the Balsamic vinegar. Continue to fry very gently until the onions start to caramelise.
Meanwhile cut up the pigs’ cheeks and roll them in the seasoned flour.
Peel and quarter the cooking apples.
When the onions are ready, place them in the bottom of the slow cooker. Put the apples and pigs’ cheeks on top of the onions. Cover the meat apples and onions with dry cider. Add the thyme.
Set the slow cooker to high and when the cider is bubbling turn to low and simmer for about three hours or until the pork is tender. (check after 2 hours).
Serve with mashed potatoes, carrots and peas. A glass of chilled dry cider is great with this.