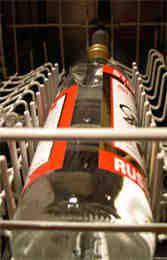 A bottle in our dishwasher demonstrates this unique method

We’ve just got back from having supper with our friends Kim and JP. They live in a fabulous converted barn deep in the wilds of Suffolk, with three horses, three hens and a very perky nine year old Jack Russell called Pickle.

Before supper Kim announced that she was going to show us the contents of her favourite kitchen cupboard. She knelt down and threw open the doors. Not knowing quite what to expect, we stepped forward and peered into the gloom. There were rows and rows of 3 litre Le Parfait jars of sloe gin standing stoically side by side like the Chinese terracotta army.

This was sloe gin production on a massive scale. She had just made a couple of bottles of blackberry vodka and gave them a quick shake to disperse the sugar. She leaves this to mature for three months before decanting. Her Sloe gin is left for a year, like ours.
“But of course,” she said as she closed the cupboard doors and topped up Danny’s whisky. “I have drunk bubblegum gin that was made in an afternoon.”

Some years before, they had been invited to a last minute party. The hostess had decided to make her own alcopops and flew down to town to stock up on gin, vodka and sweets. With only hours to produce the grog she speeded up the process by putting the bottles through two cycles of the dishwasher. On the intensive setting.

JP was doing the driving that night so it was only Kim who knocked back the bubblegum gin.
“They also drank Dimebar gin,” added JP, giving me a straight look, “and Mars Bar gin.”

Probably for the first time in his life, JP was delighted to be the driver. Poor Kim had no excuse to avoid the row of pink and brown bottles. When pressed, Kim admitted that they were all drinkable. They were very, very sweet. The hangover unfortunately was not.