Posted by Fiona Nevile in Chicken, Rice and Pasta | 3 comments 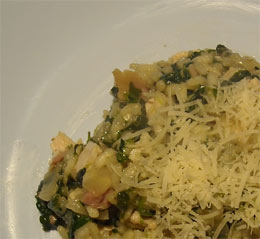 Sometimes we pick up great bargains at Tesco. These are not in the CFC (Condemned Food Counter- our fun name for the soon to be out of date/ reduced item shelf) rather in baskets or on the shelves. These are deluxe items that are just not selling in our branch. A few months ago we discovered the wonder of Tesco Finest Tellicherry peppercorns. These were reduced to half price and were a real revelation. Luckily I bought two packs and when these run out I will be searching for them on line. Normal peppercorns are a feint whisper compared to the flavour and depth of Tellicherry ones. Apparently they are left to ripen completely before harvesting.

Last week Danny returned home with a small jar labelled Urbani Tartufi (tuber magnatum pico) – Porcini Mushrooms in a White Truffle Paste. The 80g jar was reduced from £4.99 to £2.49. We love porcini mushrooms and truffles.
“It might be good spread on toast with scrambled egg?”
“Or in a frittata, or omelette?”

All too often we are given a luxury and it sits in the larder because we don’t want to waste it on just any old meal. Often by the time we decided to sample the luxury it’s well past its sell by date.

So I kept the diminutive jar out on the worktop beside the breadbin. This treat was not going to be lost in the larder.

This week I fancied a chicken risotto but didn’t have my favourite ingredients – red peppers and tomatoes. I had a pack of spinach leaves a couple of handfuls of diced chicken breast and some cooking bacon. Then my eye fell on the jar. Perhaps a teaspoon of the truffle mixture would transform the mundane into something spectacular.

The risotto smelt superb as it was cooking and finally I was able to gingerly taste the dish. It was pretty good without the truffle mixture but when broke the seal and stirred a teaspoon into the risotto the dish was wafted onto a distant ambrosial plane.
“This is not a summer dish,” mused Danny, “it’s perfect for a chilly evening like tonight but it’s too sultry to eat in a heat wave.”
“That’s fine as we don’t have many of them!”

Between you and me I had initially been horrified that D had spent £2.49 on that luxury. Having tasted this risotto, I’d happily pay £4.99 for a jar. There’s probably enough in the jar for at least 32 portions of this risotto.