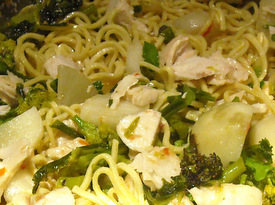 One of the highlights of the veg growing year is the harvest of purple or white sprouting broccoli. OK they take a long time to mature – the plantlets go into the soil in early July and they are harvested from March the following year. But the flavour is wonderfully sweet – totally unlike the PSB available at great expense in the shops, which can be a bit bitter.

This stir fry took advantage of the sprouting broccoli from our allotment. It also uses chicken left over from the Sunday roast and of course yacon from last year’s harvest. If you don’t have yacon the texture can be supplemented with water chestnuts.

The new twist for me was using the left over gravy from the roast chicken. Danny doesn’t thicken his gravy and he uses a fat and lean gravy boat. This means that the fat from the gravy can easily be removed and you are left with a good starting point for a fat free stir fry.

I’ve used a little stock, rather than oil, to start off a stir fry before. This is the first time that I’ve used left over gravy and the results were stunning. A lovely rich tasting stir fry with very little/if any fat.

Fresh egg noodles for two (or packed noodles at a pinch)
1 large handful of cold, cooked chicken pieces
2 large handfuls of sprouting broccoli (leave the florets whole and chop the stems into 1.5 cm lengths. Discard any woody stems)
200g of yacon – peeled and sliced into chunky pieces 2.5cm wide and 1.5cm deep (if they are not going to be used immediately toss them in lemon juice to stop them turning black) If you are not a yacon grower, water chestnuts would be a reasonable substitute.
1 tsp of garlic granules
8-10 tbs of sweet chilli sauce
4-6 tbs of left over chicken gravy
Water
Salt and pepper to taste

Heat the chicken gravy in the bottom of the wok
Add the chopped stalks of the broccoli and simmer gently (lid on) until they soften – with a bite. Add more water if necessary.
Add the garlic granules, broccoli florets, yacon and sweet chilli sauce and allow to come to simmering point.
Add the chicken and noodles, stir well until the liquid comes to simmering point. Remove from the heat and put the lid on for 3-4 minutes.
Adjust seasoning if necessary and serve on warm plates