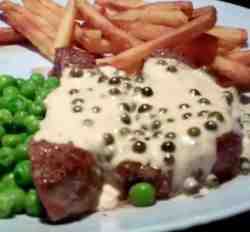 I spotted a fillet of beef joint on the Tesco butcher’s counter. It had a good dark colour and I reckoned that it would taste great. As a payday treat I asked for two small fillet steaks about 2cm/0.8 inches deep. I rushed home with the bounty – Danny would cook the steaks and I’d make the green peppercorn and cream sauce.

Green peppercorns are sold ‘wet’ in small jars of brine. They are crunchy and reasonably hot but don’t have the kick of dried black peppercorns. I love them.

One of the easiest sauces to make is a cream sauce. It can be whipped up in literally seconds and can give a deluxe feel to a simple dish such as a steak or fillet of fish. I discovered this by mistake when I was experimenting with sauces for fillets of plaice. I poured some double cream into a frying pan and stirring for just 30 seconds, it thickened before my eyes.

I’ve been planning to make a green peppercorn and cream sauce for weeks. Initially I thought that it would be a great sauce for roasted duck breasts. This idea is still waiting in the wings for duck breasts to turn up on offer or the CFC*. Meanwhile, fillet steak would be a perfect alternative as it does not have the depth of flavour as a sirloin or rump steak.