Navigation Menu
Home » Chickens » Sexing the bantam eggs: results of the ring test on the clutch of mixed bantam eggs

Sexing the bantam eggs: results of the ring test on the clutch of mixed bantam eggs 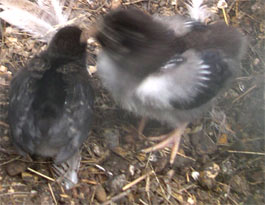 I must admit that I felt quite confident about the ring test on the lucky dip bantam hatching eggs that we bought on eBay. The ring test predicted that Dixie and Beatyl would be female chickens. But there has always been something about Beatyl Chick. A certain Tyrone Power swagger and adventurous approach to life in the Emerald Castle and grounds.

“I’ve a strong hunch that Beatyl is a young cockerel.”
Danny looked alarmed.
“How long before we know for sure?”
“Now.”
“Does this mean that the ring test was wrong and dowehavetoeathim? Did you do the test properly and how about Dixie?”

Dixie is showing no physical male characteristics. She is twice the size of Beatyl and like most big sisters, she is putting young Beatyl through his paces. They play and spat all day. Dixie is more self contained, staying within reach of Mrs Boss. Even though Beatyl has independent projects he is the first to shriek and run for the cover of a maternal wing when I open the door and clatter about in the run.

The ring test had a 50/50 chance of success. I’d do it again if I got a mixed batch of eggs even if it’s just for fun.

Studying chicken breeds on the Internet, I think that he might be a Sebright, possibly a mix. He’s developing black, silver and tan feathers. The tiny egg that he hatched from was just marked with a mysterious S. So we just have to be patient until he has developed enough feathers to match him to a breed.

We are not planning to eat Beatyl even if my suspicions are correct. The moment when I opened the side of the Emerald Castle and saw him standing there softened the grief of burying Great Aunt Daisy Beatyl. Here was a new small life, contained in half an eggshell and yelling for attention. If Mrs Boss hadn’t rushed to comfort him I would have reached in and held him close.

That night Danny turned over.
“Perhaps being very small, his crow will be diminutive.”
“If it’s a piercing call. We could make him a run, nearer the house and away from the neighbours.”
“Then he’d wake us up.”
“I wouldn’t mind.”
“Nor would I.”
“He would need a handful of girlfriends to keep him company.”