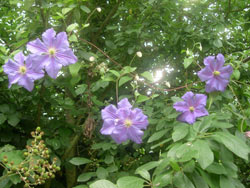 Many years ago, when I wasn’t into cooking, I invited my best client and his wife for a weekend in the country. This was one of those invitations that you suggest to a very busy person after a very long lunch. To my horror he jumped at it. We both enjoyed good Soho food.

Perhaps he assumed that as I savoured good food, I must be a great cook. Wrong. I was living in a high speed world where one just ate out. Apart from these forays it was sandwiches in the week and steak when I came home for the weekends. Light years from where I am now. I worked a 16 hour day five days a week. Even my breakfast was ‘sent in’.

Although I had moved into the cottage four years earlier, the interior looked unusual. It wasn’t really a home – just somewhere that I went to at weekends. My sole focus was creating a garden.

With a heavy weekday work schedule, weekends were spent entirely outdoors. Gardening is immensely therapeutic and a great foil for a stressful job. I used to come indoors when it grew too dark to see. I’d fix myself a simple meal and watch a couple of movies before I went to bed.

Back then, I had no real interest in the interior of the cottage. Most of my stuff was still in packing cases with only essentials removed. So I lived in a strange land. A packing case city with slim lanes to places of importance – the bed, the bathroom, the telly viewing chair and the kettle and coffee. The fridge was totally accessible as it was on the main highway to the garden. A road broad enough to accommodate a hefty wheelbarrow. Plants were transported through the kitchen to the garden at this time.

I had ten days to prepare. I took a week off work and to unpack and arrange the cottage so that it looked as if someone vaguely normal lived there. After three panicky days I realised that I had to move a lot of stuff into the rat room and bolt the door.

The day before they were due to arrive I rang my sister for a foolproof recipe for dinner on Saturday night.
“Delia has a great recipe for lamb with sherry vinegar. It’s delicious and foolproof. A bit of a palaver but they’ll love it.”

I shopped for the ingredients and started cooking that evening. I had no measuring jug so I guessed the amount of sherry vinegar for this dish, pouring in about a quarter of the bottle. As it bubbled away on the stove, I happily dusted and vacuumed. At 01:00 in the morning of the day of arrival the cottage was looking immaculate and I lifted the lid to taste the dish. A sharp waft of steam stung my eyes. It tasted vile and defurred my teeth in an instant.

Too late to ring my sister, I wildly examined the larder for a remedy. As I knew nothing about saving a flagging dish, this was as optimistic as a hoping for snow in July. Acidity might be balanced by something sweet? Eventually I found an elderly jar of honey and poured it into the casserole and repaired to bed. Hopefully some 24/7 genie would work magic overnight.

At seven the next morning the dish was edible without gagging. I was so relieved. Even though I knew that it wasn’t quite right I didn’t speed to Waitrose for an alternative and spent my free hours titivating the cottage and painting the wood burning stove.

My visitors arrived. We had drinks out beside the pond beside and eventually repaired inside for sherry vinegar casserole with lamb. At this stage in the relationship, I had no idea that Delia’s recipes were a pretty big hit with my client. He had cooked them all.

He tasted a forkful and glanced up. Squarely.
“Sweet and sour lamb. Interesting. Are you sure that it’s Delia?”
I changed the subject swiftly and have been suspicious of using more than a teaspoon of vinegar in a dish since then.