Navigation Menu
Home » Cottage tales » Should we turn the clocks back?

Should we turn the clocks back? 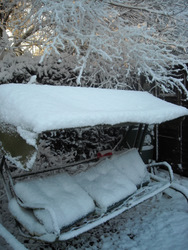 My ex husband B used to start fretting in August about the shorter days in Winter. The grizzling drove me nuts and spoilt the summer for us both.
“I can’t bear the thought of tramping round a muddy field with Fly under a cold grey sky.”
“But what about the good things about winter? Roaring fires, Christmas, crumpets and snow.”
“It’s January and February that are the worst.” He’d gloom.
After we split up I heard that he’d invested in a SAD Lightbox. 18 years ago they cost a few hundred pounds – luckily they have dropped in price since then.

I must admit that I’ve been feeling a bit like B for the last couple of weeks. Tending to garden in the afternoon, dusk gently stops play just as seem to be making some progress. ATM I’m still digging rubble out of the new long border the runs from the gate to the cottage in the front garden. I’m longing to play in the solar tunnel but creating this border has made such a mess of the front that finishing it and clearing the piles of rubble and roots is a priority.

And on Sunday the clocks will go back and it will soon be dark by 4 pm. Arrgh. In yesterday’s Costing The Earth I was delighted to hear that a private bill is going to be debated in Parliament in December that requests that the clocks are not turned back. This will save on fuel, our carbon footprint and lives amongst other benefits. Not turning the clocks back was tried in the late sixties for three years and was voted out without the results of the research being known. More children died in accidents in the morning but far fewer actually died overall. Cutting our carbon footprint wasn’t a concern in those days. You can listen to this programme again on the BBC iplayer here.

I, along with the children interviewed, would prefer darker mornings and lighter evenings. Have you any thoughts on this?