The slow cooker chef: Carnivores on a budget soup recipe

Posted by Fiona Nevile in Starters and Soups | 14 comments 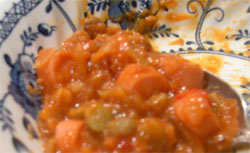 Cayenne pepper is not something I have used very much over the years. In fact, until last week, we were using a jar that I had bought when I moved into my first flat in 1979. It was just sprinkled on egg mayonnaise as a garnish. It still smelt spicy to me.

Cayenne seems to be a handy ingredient for vegetarian dishes so in two weeks we used the final 95% of the small vintage canister. When I opened a new jar I instantly twigged that we were dealing with a much livelier beast.

I was using our new slow cooker to make soup for Danny’s lunch using the Number 1 soup mix from the Daily Bread Cooperative and a lot of fresh vegetables. I reckoned that the smell would tantalise him for at least six hours and feed us the day after. I reined in my newly acquired Cayenne habit and only added a teaspoonful from the new jar.

I got a call mid afternoon.
“The soup was great. The first mouthful was absolutely delicious. During the second, a hot sensation developed in the back of my throat. By the third, my taste buds were cauterised. What did you put in it?”
Danny doesn’t do ultra spicy. Especially chillies. They make him break out in a sweat and result in massive restaurant-silencing hiccups.

“Just a half teaspoonful of Cayenne.”
“I like Cayenne. What else is in there? In any case, I’ve had three bowls of it since two o’clock. And lots of water.”
“Great. Did you know that Cayenne pepper is made from chillies?”
“Oh . .”

On Friday I made the soup again substituting the tin of tomatoes with some passata that was knocking about in the fridge. I reckoned that this would make a much classier soup. I only added I added a half teaspoon of cayenne (standard measuring spoon rather than the large teaspoon that is used to make the tea and coffee that is always knocking about on the side). I was surprised when no call came.

So I rang home. I knew from the pause that all was not well at Skinflint Towers.
“The soup was OK. The chilli was just right.”
“What’s wrong with the soup then?”
“The passata isn’t nearly as good as the tinned tomatoes. The soup’s much thicker. I enjoyed it but you’ll see when you get home.”

Even before taking off my jacket I lifted the lid of the slow cooker and tasted the soup. It was dull. What on earth was I going to do with 1.5 litres of boring soup? The dogs loved a generous dollop on their supper but there must be some way of pulling the soup around.

The next morning I woke to a miserable wet day. The soup was still lurking in the slow cooker. Then I remembered the recipe that Kay Sexton had left in the comments section of the Spicy Creole bean and summery vegetable soup recipe. A slit pea and vegetable soup with frankfurter sausages.

At lunch time I heated up two bowls of the soup and added 3 frankfurters chopped into coins (Waitrose sells a pack of ten for about £1.60 with far less additives and E numbers than the ones in the jars). The transformation was remarkable. The combination wonderful. The photo messy but snapped mid meal when I realised we were on to a winner. Thanks Kay, you made my weekend.

The slow cooker chef: Carnivore on a budget soup recipe