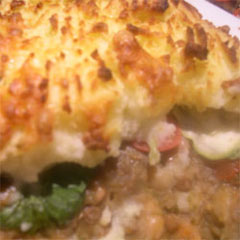 Last week was wet and cold and gloomy. I fancied some winterish flavours and felt inspired to try my hand at creating a new vegetarian dish. I wanted to make something that would avoid the palaver of many veggie dishes. A dish that I could leave bubbling in the slow cooker for hours, that didn’t need loads of preparation, required no frying off and wasn’t packed with tomatoes, chilli, cheeses and sweet peppers.

I wanted the subtleness of deep English wintery flavours. A vegetarian dish that I could imagine being served in an individual pie dish at traditional English restaurants such as Rules or Simpsons in the Strand.

“Why not make the filling in the slow cooker? It would be low fat.”
Suggested Danny as he eased the butter across his morning toast. Lavish scrapings in the morning require moderate fat in the evening. It’s a balance after all.

We have enjoyed Delia’s Vegetarian Shepherds Pie for months now, cooking it in large batches and freezing the filling in portions. I love the way she uses fresh sliced tomatoes between the bean and vegetable mixture and the mashed potato topping. But the dish is a palaver to make, and I find myself hanging about in the kitchen for hours.

Using Delia’s recipe as a starting off point, mainly for the balance of beans and pluses to root vegetables, I felt sure that the slow cooker (crock pot) could save on my time. And it did. With a slow cooker, or in the slow oven of the Aga, the filling for this pie is a doddle to make. The slow cooking also enhances the flavours.

The beauty of this recipe is that everything, apart from the mushrooms are tossed into the pot at the same time. No need to fry the onions or vegetables. So the filling is quick to prepare and virtually fat free.

We make our mash using a potato ricer. A great investment as it makes lump free mashed potatoes effortlessly. I stirred in a heaped tablespoonful of English Goat’s yoghurt (the 0% fat Greek version just doesn’t work) and a dash of rape seed oil and lashings of ground white pepper. I finished it all off with a large handful of Cheddar cheese. Perfect.

reheated from cold the dish will need about 40-45 minutes.