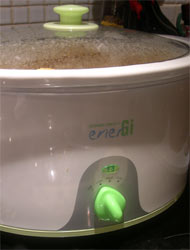 “Oh I mustn’t forget to go into the garage!” Angela turned the internal key and disappeared into the darkness.
“Fiona, do you happen to know where the light switch is?”

I could find it blind. The first few days when I was working in their empty house the fuses tripped regularly and I was in darkness. Fine if I was near the garage, not so fun if I was upstairs.

Within seconds she was carrying a large cardboard box into the hall.
“It’s a slow cooker. If it works, I’ll take it to France.”
Back in the seventies I had toyed with the idea of buying a slow cooker

but decided against it. Who would want to be frying onions and meat before breakfast?
Angela sensed this and added almost apologetically, “I just want it for Steak and Kidney.”

Magical words.
Centre stage, she gently put the box down and turned to me.
“With a slow cooker you don’t even need to fry the meat. Just roll it in seasoned flour, cover it with enough boiling water not to dry out and eight hours later you have steak and kidney to die for.” Her smile was radiant.

I was impressed and astonished that anyone still cooked with these things. So surprised that I was incapable of even thinking of a sensible response. So I just nodded and smiled.

The next day I was propelling my trolley past a large discounted display in Tesco. There was a slow cooker (half the original Tesco price) I immediately thought of Angela’s Steak and Kidney. I could be tossing the meat in seasoned flour at dawn and returning exhausted to the heart of a wonderful meal nine hours later. I grabbed a box and tried it for size in my trolley – there was plenty of room as I had only just started shopping. Then I thought of the palaver of explaining why I had a slow cooker in the boot of the car to D and quickly returned the box to the shelves.

On the drive back home I had plenty of time to reconsider the purchase in depth. Our slow cooker could be the work horse to make our overnight stocks and soup. Surely a 290 watt slow cooker couldn’t use the same energy as a tempramental Zanussi fan assisted oven over the same length of time. It would be using the pwer of three lightbulbs comapered to an energy sucking beauty with heat, light and noisy fan. The slow cooker could silently make casseroles and even pot roasts. Danny didn’t need all these reasons if I whispered “Easy Steak and Kidney” through the gap around the front door he would be pushing a blank cheque though the same slim but draughty slit within seconds. Note must get a bale of draught excluder.

We tried Amelee Issa’s recipe for split peas and ham in the slow cooker today (her excellent recipe appears as a comment on our Ham and Parsley Sauce recipe). A virgin run of our new Slow Cooker and Amalee’s Recipe had every living being in the kitchen happy and expectant for 6 hours. Thanks Amalee it was superb and the dogs finally let rip and bayed until we gave them some too.