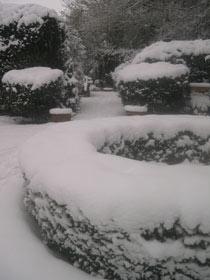 Photo: Snow in the cottage garden

My brother Mark had carpentry lessons at school. Once he brought back a sweet little stool that still stands in my mum’s bathroom to hold books beside the loo. The other thing that I remember was a large and sturdy toboggan that he made when he was just twelve years old. It was big enough to accommodate all three children in our family.

My mother had remarried and we were moving to Devon, a county renowned for its mild winters. Secretly she thought that the toboggan would hang redundant in the garage.

But this was the winter of 1962/63, probably the coldest winter since 1795. Most of the UK was under snow from Boxing Day until March 1963. The sledge came into its own. The perfect chariot for getting the most thrills out of the snow.

We flew down steep hills clinging together in order of age. My brother steering at the front, my sister in the middle and me at the rear. I can still remember the speed and the frosty air and the final tumble into the deep drifts at the bottom. Luckily these were cushioned landings every time. Then we’d rush back up to the top again, adrenalin pumping, excited and united.

I remember sitting in the back of my stepfather’s car as he drove through the slim Devon lanes, snow up to the top of the high hedges on either side. It was a strange, desolate yet beautiful world.

Studying the weather report for that period this evening, I was shocked to read of the wildlife and livestock that died of starvation that winter. I had no idea.

I always think of Mark’s sled when it snows.

Eighteen years ago I tobogganed on Newmarket gallops. Like today, it was one of those rare times when it also snowed in central London. Out on the gallops there were three of us and Fly, my first Min Pin, who was addicted to speed. My friends had unearthed an old Swiss toboggan in their shed. It had patches of woodworm but went like the wind. It collapsed gradually over the course of the afternoon until it was just a skeleton, only able to transport the lightest member of the group and Fly. Until today, there hasn’t been enough snow for tobogganing on the gallops.

I stayed indoors today, making marmalade. And dreamt about tobogganing – holding on tight, slightly out of control, the dazzling light and the laughter echoing across the snow.